Having once again come upon budget constraints when it comes to buying Warhammer 40,000 models (If only they weren’t so expensive there are so many I would love to get), I have once again moved into Papercraft as a decent alternative.

You may recall my Papercraft Drop Pods  that I did back in September.  In a similar vein I have decided that I could use some more Rhinos for my Tactical marines to move across the board in.  I picked up a couple of Rhino kits fairly cheap off Ebay, but with 4-5 full Tactical squads in my collection, 2 just does not cut it.

Enter the crazy Russian, Eli Patoroch!  For those who don’t know, Eli Patoroch has made dozens of Paperhammer 40k templates.  And these aren’t just quick print, cut and slap together templates.  Oh no, they are works of art!  Each one is scaled to the same size as official GW models and include so much detail that it’s insane!  I absolutely recommend his templates for anyone interested in high end Paperhammer models.

For this project I used the 132 Rhino MkV 01.pdf.  This pdf file is 21 pages long, but fear not.  Many of those pages are full colour templates and instructions.  If you want to paint your Papercraft, then you need only print out the Line drawing/black and white pages of the template.  And even then, several of those pages are Razorback upgrades and not part of the standard Rhino.

Once the templates were printed out (I didn’t print out the instructions but rather just had them on screen to refer to) they were mounted to the cardboard with Elmers spray mount adhesive and allowed to dry for a couple of hours. 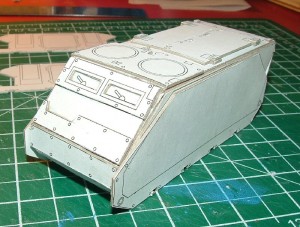 Carefully refering to the instructions I then proceeded to cut out the appropriate pieces and assembling (see above picture for the first portion).  AFTER assembly I realized a number of portions I did “wrong”, but the final product does not show it.  They were only wrong if you want your model to be fully operable just like the official GW models (Opening doors/removable hatches).  Specifially I did not cut out sections where the doors and hatches slot into place.

I strongly suggest looking over the instructions (which are not entirely clear but more a good reference to refer to) several times so you don’t make the same mistakes!

After all the pieces were cut out and individual parts assembled I very quickly got to assembling the components.  So far this project (one Rhino) has taken me approximately 8 hours.  Next up are some of the extra details (raised areas on the hull).  I will then coat it in a thin coat of watered down PVA Glue, follow up with a coat of black primer and then paint just as I would a normal GW Model.  Yeah, it’s going to look a little rough at the edges.  Yeah, it’s not perfect.  But let’s face it .. if you have more TIME than MONEY, this is a fantastic alternative.  I know there are a lot of people out there who will look at your paper model and scoff, and even fewer who will refuse to allow them in a game;  But most people will simply look at them and say “Wow .. that’s PAPER?  Awesome dude!” and carry on with the game.

Admittedly I am horrible at remembering to take pictures of my progress.  However, here are some comparison pics with my GW Rhino compared to the current state of my Paperhammer Rhino.  Enjoy!