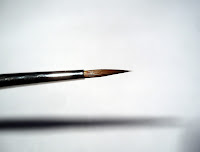 The importance of brushes for miniature painting cannot be underestimated. Being able to steady your hand or having painting skills don’t really mean much if your brushes are worn out or crap quality.

Like many others I grew up with Games Workshop games and for a very long time I was limited to Citadel paints and brushes. Like everyone else my first efforts to paint something were horrifying. The colors may have been applied in a tidy fashion, but it was block painting without layers, depths, shadows, highlights or anything at all beside one coat of each color. As you get gradually better you also start painting smaller and smaller details, maybe even try some freehand symbols. For this a good brush is needed. And it was around this time of my development as a miniature painter that I started to get frustrated and either started noticing the problem or perhaps there was in fact a decline in quality but I had to move on and find brushes from another manufacturer.

The problem with GW brushes was that they were synthetic, and it would not take more than a few painting sessions before the tip of those brushes bent into this horrible angle that made it impossible to use for precision painting. You could still use the brush to paint large areas fairly well, but forget painting eyes and teeth with that kind of thing.

Venting my frustration at a local hobby store the owner suggested I try brushes made out of nature hair, according to him brushes of this kind did not suffer from the deformity problems. You could always straighten the tip out. And that pretty much sold me on buying a few new brushes made out of some squirrel or other unfortunate animal from the Siberian steppes.

The thing I wasn’t prepared for however was the transition between synthetic and nature hair brushes. Synthetic brush hair is a lot stiffer and harder, I could draw lines merely by applying pressure when painting. With nature hair I found the tip to be very soft and had to adjust my painting style and most importantly work a lot more with thinning down the paint with water to the right consistency, the sharp tip was able to draw lines but only if the paint pretty much gently rubbed off as it was moved over the surface. I’m sure my painting improved from the adjustment and change of brushes.

There are a few things which make a brush suck, signs of when to get a new one.

You already saw the bent tip of the synthetic brush, synthetic brushes are still good for drybrushing as they aren’t as fragile as nature hair brushes. So I use a few synthetic brushes for “heavy duty” work. But common for both types of brushes if how they start to look like a feather duster if paint starts to build up and dry around the metal joint that holds the hair in place. Once this happens it’s game over for the brush and all it is good for now is drybrushing sand, trying to attempt precision drybrushing of small surfaces with that kind of tip would just splatter paint particles around the sides.

Another extremely annoying thing that sometimes happens when your brush gets worn out is that the tip ends up with a few longer hairs, so that when you form the brush into a sharp end you will have a couple of hairs that will impact on the model surface before the actual tip touches it. This will very often break up the shape of the brush, especially if it is a tiny detail brush, or you will have paint drip down and forming a tiny drop at the very tip. The later example ruins any attempt at painting details such as eyes where you need a sharp tip to make a precision painted line or a dot. Because when those few hairs with the tiny drop of paint touch the surface first you will have screwed up a smooth surface which makes it harder to paint with precision and more often than not this tiny drop will instantly dry and build up a bump that has to be removed with a knife or other sharp object before you try again.

Then there is the tired old swirly look that some brushes may end up with after long use. I know many people shape the tip of the brush with their mouths, I personally can’t understand why you would want to suck down on paint, I shape my brushes by swirling them into a spear tipped shape on my mixing table. Dipping the tip in paint and then turning the brush 180-360 degrees while having the tip against the plastic surface of the mixing station. Some brushes that get worn out just won’t be able to take on the spear tipped shape anymore.

Brush handles is seemingly a minor detail, but I personally can’t stand triangular handles. Sometimes when I paint I jave to spin the brush with my fingers – the triangular shape just breaks that up and makes it a lot harder. So if possible stay away from those triangular handles. If your fingers hurt from grasping the brush too tightly just tape it at the point where you are holding it, your painting will benefit from a rounder handle.

Finally one thing regarding paint containers. Drop bottles used my Vallejo, Army painter and a few others may for many people (me included) be annoying as they tend to clog up and have you use a sharp pin or something similar to clean the nozzle – or else it would result in a explosion of paint when you just apply too much pressure. However, the upside besides the paints never drying up as opposed to the painting pot with a lid, is that you always see how far your brush goes into the paint when swiping some up. Painting pots block your vision, and especially with tall painting pots like the P3 Formula colors once you start to get to the bottom of the pot it gets increasingly hard not to dip your brush too far. And as I mentioned, getting paint up into the metal joint it begins the process of slowly ruining your brush.

I could also add that there are fairly cheap, or rather affordable, nature hair brushes that you can buy for like $5/£3/30SEK per brush. These hold up very well, while at the same time being cheap enough so that you don’t have a panic attack if you accidently ruin a brush with super glue or sloppy use.

My latest batch was given to me as a Christmas present from my buddy Thomas, they are of a different brand than I have used up until now, but they use the same nature hair “Kolinsky”, which is a kind of weasel.