Living Card Games, Collectible Card Games, Deck Building .. what does all this mean?  How do you make heads or tails of it all? 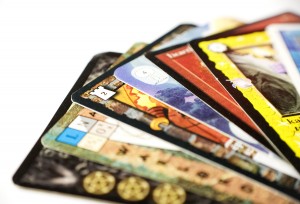 For the longest time, being a collectible card game meant the same thing : You would release a couple (or a series) of starter packs to get people into the game, expansions would be released every once in a while and booster packs would be sold that included random sets of cards with different rarity.  Deck size, theme and rarity would change, but every game followed the same formula since the concept of the collectible card game was introduced in the early 90s .. this was just how the CCG world worked.  If you wanted a specific card (usually rare ones) you either bought it second hand or opened booster pack after booster pack (after booster pack) until you found that one card.

Collectible card games had their time in the sun.  There was a time when CCG’s ruled the gaming world.  Now, only a few remain.  Magic the Gathering has enjoyed a resurgence in popularity, and is still going strong.   Unfortunately for the cash strapped, staying current is all but impossible, as each year a new core set is released, as well as 3 expansion sets.  Older sets generally fall out of legal use if you play in tournaments and official competitions, and so it is a CCG that can never be fully collected.  Smart marketing, but bad for those who can’t afford to keep up.

Living Cards Games are the brainchild of Fantasy Flight Games.  Rather than purchasing a deck of cards to get started, you purchase a “Core Set” of cards, that allow you to enjoy a complete game with a large variety of possibilities.  However, they also release at regular intervals, Chapter or Adventure (aka : expansion) packs to add and expand the possibilities of the original core set.  Each Chapter pack comes with the same set of additional cards, so there is no need to buy unknown numbers of them or search the aftermarket to get the cards you want.  These are essentially CCG’s where booster packs aren’t needed!

Living Card Games take what you know about traditional card games and turn them upside down. First of all, LCG starter boxes will contain a large assortment of cards pulling only from cards that have already been released. No new cards are introduced in starter boxes, and the starter boxes themselves are limited edition products meant more so for new players to get a head start into a game where their friends have already built up a collection.  Aside from this change in starter packs, booster packs and expansions are also done away with. Instead of releasing massive expansions 3 or 4 times a year, living card games feature monthly releases of “collector’s packs”. Collector’s packs each feature a fixed and unchanging set of cards.  The contents of each individual pack do not change so players will always know exactly what cards they are getting when they buy a Collector’s pack. Packs include new cards only, and continue to be reprinted as long as the game is out.

Reactions to this strategy of CCG development are mixed. On one hand, the LCG format makes it much easier (and a LOT cheaper) to find the exact cards you want. On the other hand, the lack of randomness in pack design makes it questionable as to whether or not the game is truly “collectible”.

Still though, the LCG format does bring its advantages to the table. LGC packs are affordable, and they promote more intricate deck building, as obtaining specific cards ceases to be an issue. In addition, the LCG format keeps fans excited about new cards all year round. Just when players get used to the last collector’s pack, a new one will come out shaking up the game again.

Ok, so what is a Collectible Card Game and a Living Card Game exactly?  Let’s go to Wikipedia! 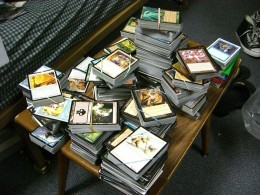 A collectible card game (CCG), also called a trading card game (TCG) or customizable card game, is a card game that uses specially designed sets of playing cards. Terms such as “collectible” and “trading” are used interchangeably because of copyrights and patent holdings of game companies. The rudimentary definition requires the game to resemble trading cards in shape and function, be mass-produced for trading or collectibility, and it must have rules for strategic game play. The definition of CCGs is further refined as being a card game in which the player uses his own deck with cards primarily sold in random assortments. Acquiring these cards may be done by trading with other players or buying card packs. If every card in the game can be obtained by making a small number of purchases, or if the manufacturer does not market it as a CCG, then it is not a CCG.

Typically, a CCG is initially played using a starter deck, or intro deck, which has a basic complement of cards that can be used to play the game. This deck may be expanded or modified with cards from booster packs, which contain a random selection of cards of varying rarities, usually between 8 and 15 cards. One of these cards is a rare or unique card that is much harder to obtain than the remaining cards and often has a higher value than the rest, though these values change over time as distribution changes, cards are banned in formats, or the game is further changed by the introduction of more cards later on. Eventually, with enough cards, new decks can be created from scratch. 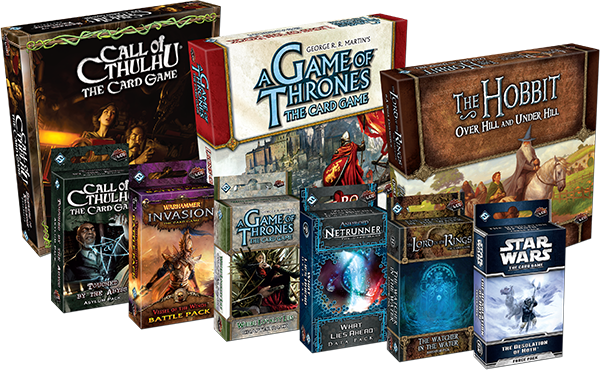 A Living Card Game® (LCG®) offers an innovative fixed distribution method that breaks away from the traditional Collectible Card Game model. While LCGs still offer the same dynamic, expanding, and constantly evolving game play that makes CCG’s so much fun, they do away with the deterrent of the blind-buy purchase model that has burned out so many players. The end result is an innovative mix that gives you the best of both worlds!

In the end, there is a very small, but noticable difference between Collectible and Living Card Games.  That is, primarily, the “collectible” and rarity aspects of the cards.  Which one is best?  That really boils down to what you like to be fair.  If you like to hunt for rare cards to increase the potency of your deck, then the CCG is the way to go.  If you want to be able to buy a game and not sink any more time and money into it but still be capable of playing comfortably and competitively for years to come the LCG route may be your best bet.  Of course, if you like a particular theme that may be the deciding factor!

The choice is yours – be informed, check out the options and choose .. wisely!