CMX Games is now taking orders for Copper Country, a new board game set in the rough and rugged Upper Peninsula of Michigan during America’s mining boom. Players play as the head of a mining company and must stake their claim to extract as much copper as they can before it’s all gone. But there’s more than just “dig and sift.” You must increasingly deal with the lives of your workers and the lives of those that come to your community to support those workers.

Copper Country was created by gamers who know what life was like during through rough and rumble days and have done their best to bring that sense to the game. Much more than just a resource management or board control, the game brings to life the struggles of the Upper Peninsula. The mechanics allow for varied play style, each with their own advantages and disadvantages. Do you rush underground with men and machine, risking collapse or other dangers, to try and get out as much mineral as possible? Do you try and slowly build up your resources before building down into the ground, risking that your opponents will grab that ore first? How will both styles handle the stress when ore starts to become more and more scarce? The byproducts from the mines, themselves, can potentially be your downfall if you don’t manage it correctly.

The game comes with a double-sided game board, 4 player boards, and 89 wooden game pieces (used to represent such things as miners, various styles of houses, and “poor rock”), various tokens to represent terrain, 162 cards (including both 19th and 20th century event cards that re-create various real-life events and how they effected copper production). The game retails for $60. You can pick it up in the CMX Games webshop. 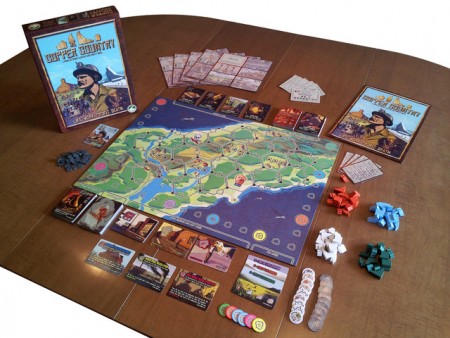