Written by Anatoli on February 26th, 2015 at Anatoli’s Game Room

I am crazy about everything Witcher related so I was initially super excited when I heard about a boardgame being made based upon the Witcher books. I got onto the bandwagon early with the digital version of the game released for tablets and had been playing it a bit but it didn’t really satisfy me (never mind the online part playing with gamers suffering from acute ADD!).
Once the game was finally released as a proper boardgame my interest had cooled off a bit, I was no longer sure if it would be a good investment of money in relation to fun/depth/value. Following the release I was on the fence for a couple of days trying to read up on the game and what other people thought – the opinions were many and divided but generally the game seemed to fall into a average scores on review sites. It was really more a surplus of cash than anything that prompted me to buy this game in the end. 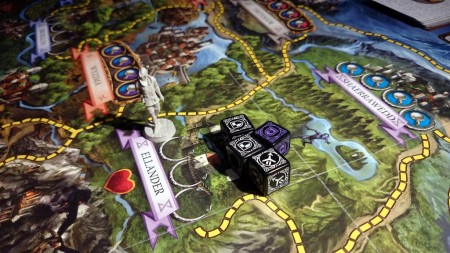 So what exactly is the Witcher Adventure Game in terms of gameplay and style? Well, I would probably put it in the same category as such games as Talisman. It’s a pretty casual game that is very easy to get into but does not offer too much in terms of depth. Basically it’s a race for 2-4 people competing against each other. Every player attempts to finish a set number of quests before any other player and then you count the victory points. A “normal” game means finishing 3 “main quests”, then there is the very long game that has 5 quests and you can play a shorter variant as well.  You finish quests by moving around the board and collecting leads (clue tokens) in order to produce “proof”. Each quest requires the player to trade in a set number of proof tokens in order to be finished and depending on which character you play in the game the focus of your quests will be on Combat, Arcana and/or Diplomacy quests. This questing is designed in such as way that the game is pretty much an individual fare with little interaction with the other players – and overall you are not far off from wondering why you would bother.

This alone would make for a very basic and perhaps bland game of token hunting and game marker pushing across the board. There are however a lot of promising features in this game that add forgiving aspects to the design choices – which in all honesty have been made on purpose to appeal to the “casual/newcomer to boardgames”-crowd.

What the game does right is conveying the overall theme of the Witcher universe quite well. The map is very pretty, and the components very high quality. The artwork on the cards as well as the tokens is superb, even the miniatures are on the high end of the quality scale comparing them to many other plastic miniatures you can get in boardgames these days. It also feels as if the game has just the right amount of components,  meaning that it does not take you half an hour to set up a game/pack it down while at the same time offer very good variety in gameplay encounters and card content.

Apart from the good representation of the universe there are a couple of game design features that I strongly like and they are:

1) The quest cards in the game are divided into a main quest, two minor quests and a support quest part. Players can boost the amount of  victory points by completing side quests, that often require a lesser number of resources to complete but that add a bit more depth to the “story” of the main quest.  Finishing a quest yields victory points, but also often has immediate game affecting effects such as monetary rewards, world altering effects or being forced to fight a creature (the quest may be hunting down a creature of legend and to defeat it).
2) Character building with role-playing light elements. All characters start out with a basic “build”, but throughout the game you are free to upgrade your character with ability cards that offer additional attacks/spells/companions etc. This character development, while not super complex, does indeed add the feeling of your character growing in strength without including actual “level up” features. Instead this is integrated into the gameplay seamlessly by having character development take up one of your available actions that you can pick from each turn.
3) Character card with actions and wounds. This is also a very intelligent and easy solution to keep track of wounds and also have wound effects play out without a lot of book keeping. Your character can perform a number of actions, such as investigate, rest, travel, fast travel and develop. If you get wounded you need to place a wound marker on one action on your character sheet – which means that you cannot perform that action until you heal that wound. The more wounds you have, the more limited you will be in what actions you can perform. When all action spaces are “wounded” your character can’t take more wounds and instead loses victory points for each new wound you receive. As such characters can’t die but they lose both time and victory points if you don’t manage your wounds properly and in time.
4) Combat dice system. The Witcher Adventure game features a really good combat mechanic which uses custom six sided dice with sword, shield and magic symbols. Encounters with monsters or during quests has the player roll these dice and you have to match the requirements. Matching shields on a monster means that you avoid damage, but if you have too few sword icons during your roll the monster will not be slain and will instead get away. Other times you may end up slaying the monster, but not have enough defensive symbols to avoid damage. It’s a quick and easy way to add some finesse to (mostly) combat situations.
5) The characters are different enough in playstyle to offer proper diversity in how you play the game. Geralt the Witcher for instance is limited to combat oriented quests and is for obvious reasons very good at monster slaying, while Dandelion the roguish bard is limited to Diplomatic quests where intrigue and smooth talking rather than a steel blade yields victory points. Through the development cards and their preferred quests they are actually all fun to play.
6) Foul fate and War track mechanics. The game has something called the War track. The way this works is that every time a player visits a region that has no monster or foul fate token the war track advances and spawns one of these. As such there is a constant spawning of monsters and foul fate as players move around the board. Monster spawning is self explanatory, though it is worth mentioning  that monsters come in “bronze” (easy) “silver” (medium) and “gold” (hard) difficulty. The war track spawns bronze and silver monsters, gold monsters are added through random events. A single region can hold several monsters, and the player is always free to choose which one monster he wants to fight from those monsters that have been revealed face up or whether to pick a still unrevealed monster token.

Foul fate on the other hand is similar to taking a wound, in that you place tokens on your action spaces on your character sheet. Whenever you activate an action with a foul fate token on it you must draw a foul fate card (then discard the foul fate token). Foul fate cards are negative random events that forces the player to fight against robbers, places “gold” monsters on the map, reduces your victory points ets. Foul fate and monster spawning is well integrated with the game design and feels natural when it occurs. … With all this said you can’t help but conclude that at the end of the day the Witcher Adventure game, in its current state, is not that exciting or good enough a game on its own. It has some very solid ideas and fantastic components and a great theme – but the game itself is a shallow experience that feels much like a solo game despite being played with other people. There is too little interaction with other players, sure you can add some difficulty for your opponents by spawning Foul fate and monsters in regions they need to visit – or boost your own victory points by completing their support quests – but it does not go beyond that. 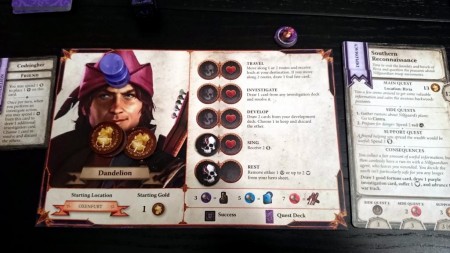 This feels weird, especially considering the characters you play with. I don’t quite understand why you would create a game where Geralt the Witcher competes against his friends Dandelion or Triss Merrigold? It would be more natural for these characters to be part of a game where you play together and work towards a common goal and against the game instead of each other more akin to Eldritch Horror. Now the designer has said that he was pretty much forced to craft a casual core game – and there have been mentioned a high possibility for expansions that would add more character interaction. What I feel is that the Witcher Adventure game was a missed opportunity to come up with a good co-operative questing game where players worked together against a variety of scenarios which both the books and the PC/console games offer. The design is with side quests and support quests could be elaborated even further and force players to complete specific parts of those scenarios with specific characters. For instance, imagine a scenario in which the King tries to find out if there are any enemy spies at his court, and divide the quest between diplomatic parts where Dandellion does his thing, a combat part for Geralt and a test of magic for Triss. The quest could require Dandellion to be the one completing the Diplomacy quest but the other characters could support him in his task with their presence and with their own resources and skills. 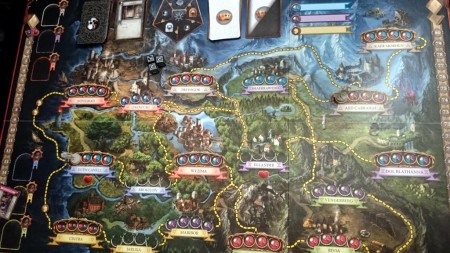 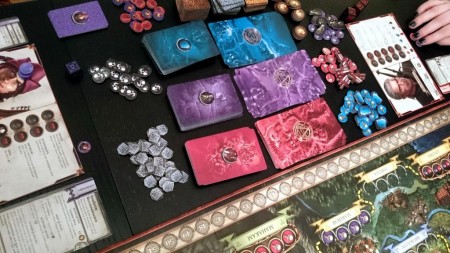 For me it is frustrating to have a game that is neither bad enough to not be played, or a good enough to make me want to play it a lot or propose to bring it with me to play with my more demanding boardgame buddies. I can only hope that upcoming expansion(s) will add more depth for the regular boardgame crowd.

This game can also be bought for Android and iOS (though you need a fairly modern OS version to play them). It is also available through Steam. The digital version of the game can be played online or solo.