Designer Blog – Into the Black

We got the gang together last night for an evening of gaming and got in some play testing of Into the Black with guys who have not yet seen or read the rules, let alone played the game. As a design team you often forget that what you know isn’t necessarily what you’ve written down and conveyed through your rules! Just because you know something is “supposed to be” played a certain way does not mean that others who are playing your game for the first time can figure that out. THIS is the importance of external play testing! If you don’t get your game into peoples hands to let them rip it apart before you go to market, you are absolutely going to miss something important, guaranteed. 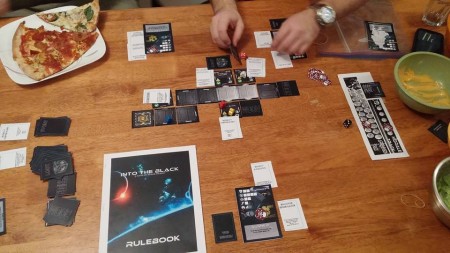 The game played fairly smoothly even with some rules tangles here and there and a few necessary tweaks that absolutely need to be made.

Some of the changes we need to make are visual, such as;

While others are rules related, such as;

There are, of course, some other minor tweaks and revisions here and there to make things flow and more easily understood as reading the rules, but overall things are looking positive! Even with the various small quandaries, the game play was fun and tension was high as the Apprehension Track and Morale Track spelled certain doom to all Pirates!

Have you read the v2.0 Beta Rules for Into the Black yet? What are your thoughts? Thanks!

James J Campbell is the Lead Game Designer at I Will Never Grow Up Gaming and is the creator of several projects such as
TechMage Sci-Fantasy RPG, Into the Black and Conflict & Chaos: Vietnam 1965.