Behind every plan to conquer the world and enslave mankind is an Emperor, Evil Wizard, or Dark Overlord who cannot believe their well-laid plans fell apart in the third act. Good still reigns supreme, and now that you’ve slunk back to the shadows, someone has to take the blame.

Aye, Dark Overlord! is a fantasy party game for four to seven players that pits minion against minion as you attempt to justify the latest failure of Evil and avoid withering looks from your Dark Overlord. 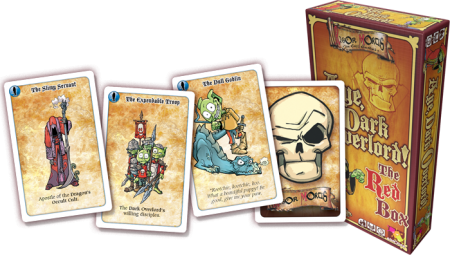 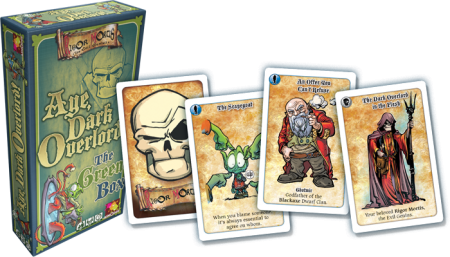 Now, for the first time, you’ll be able to choose between two distinct versions of Aye, Dark Overlord!, or even mix them together to maximize the hilarity. The classic 2005 version of the game is re-released in Aye, Dark Overlord! The Red Box, faithfully reproducing all the buck-passing and backstabbing of the original game. That’s not the end, though, because you can tell completely new stories of your mishaps with Aye, Dark Overlord! The Green Box, which includes new actions and an entirely new set of Hint cards, such as Occult Hunters, The Beast from the Labyrinth, The Jar with a Thousand Demons, and Impossible Math Calculations!