All aboard! The Essex County Express is now available for Arkham Horror: The Card Game from Fantasy Flight Games!

The second Mythos Pack in The Dunwich Legacy cycle, The Essex County Express sets you upon the fast track to terror with its thrilling new scenario. Whether you play it as a standalone adventure or as part of your The Dunwich Legacy campaign, The Essex County Express threatens to shatter your sanity as interdimensional rifts appear in the sky, train cars are ripped from the tracks by unseen forces, and otherworldly creatures crawl, slam, and ooze their way into your passenger car.

This train ride isn’t for the feint of heart, and if you hope to survive it, you’ll need to think fast and act faster. As the train is ripped apart and your fellow passengers panic all around you, your primary goal is to race as fast as you can to the Engine Car.  You have to get the train moving and get as far away as you can. It’s your only chance of escape and survival. 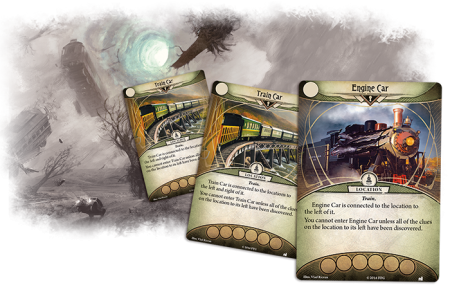