Written by Anatoli on April 12th, 2015 at Anatoli’s Game Room

Castles of Mad King Ludwig is a game that I hated, at the very least disliked, when I first played it with Caroline. It’s a game where players compete in building the most impressive castle and at the same time scoring points for impressive rooms, good layouts and fulfilling the wishes of mad king Ludwig in regards to room choices.

Initial thought was, “building a castle, that sounds like fun!”.

Then we opened the box and the first look at the components killed the mood, especially the boards where you place all the room tokens and cards – the rooms themselves were quite ok. And then we played one game and the impression was just “this is not really a good game”. You were placing rooms, and received bonus effects all the time, money was not an issue, neither was there any real restriction or plan with how you placed the rooms. I said after that one game that I don’t want to play it again unless we have at least 1-2 more people, and I only want to play again to see if the game is any different – not because I wanted to.

Then for some reason I thought, “screw it, let’s just try it one more time”. And this time we read the rules (which are not very comprehensive mind you) and it’s interesting to me how small changes in the rules (when played right) made the game completely different. I actually started to enjoy the game, and after a couple of games I thought I had enough of experience under my belt to write a review.  So, after the long intro and misguided rant – here comes the review for Castles of Mad King Ludwig!

As stated earlier, the game is a game for 2-4 players where you take on the role of build masters and competing in building the most impressive castle according to the wishes of mad king Ludwig and scoring points for good room placements, finishing rooms, building rooms of certain types, scoring points for rooms that have been all used up and can no longer be placed on the board and so on. 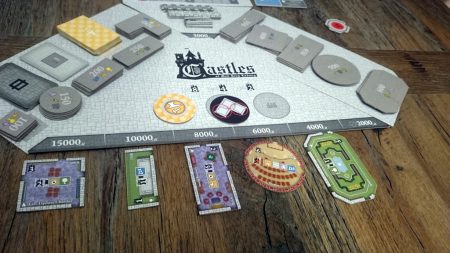 It’s really a tile placing game, however to make it more interesting the competing aspect is used as a game mechanic. Each turn one of the players act as the current “build master”. The build master can arrange the currently available room tiles and their price tag according to his own wishes – the other players get to pick rooms before the build master but they have to pay the room cost from their funds directly to him.

As such a clever/evil build master may rearrange buildings to get players to pay him well for popular rooms, he can make certain rooms out of reach for those who can’t afford them and buy that room himself. Being the build master during a turn is really about boosting your own economy for upcoming turns.

Now, regular builders can each buy one room/hallway/stairs per turn – or if they can’t afford anything or don’t want to buy anything this current round then they can pass and pick 5.000 gold from the treasury. Each turn the build master role is passed to the next player, empty spots on the “room bidding” chart are replenished and then rearranged according to the wishes of the build master. Rooms that were not picked in the previous turn get a 1.000 gold coint placed on them, these are cumulative over the next turns.

Each room type, such as garden, sleeping chambers, utility rooms etc have special rules that kick in once you finish them. A room is considered finished once you have placed adjacent rooms or hallways next to every room opening thus closing it in. Once that happens you get a bonus, be it more money, playing another turn instantly, scoring the same room twice, picking a bonus card etc.

Players keep playing until you run out of room cards and then you compare your final bonus cards and determine the order of players fulfilling the wishes of mad king Ludwig – those wishes are based on randomly generated tokens at the start of each game and show which room types give you additional points at the end of the game. You also get points if you own rooms that have been depleted. The number of room cards and room tiles in each game is determined by the number of players, and there are a lot of room cards, bonus cards and favor tokens so your games should be fairly fresh each time as you are not using all the existing components in each game.

It’s a fairly simple game, though you have to keep up with all the bonus modifiers during the game as rooms score instantly upon placement and then again when you add adjacent rooms (you can also get penalties).

The reason I did not like the game at first was that we simply thought that placing a room was the same as finishing it- That made a huge impact and made the game too easy. We also missed the adjacent room bonus/penalties and how to properly implement them. Getting those two things straight made for an instantly more enjoyable and challenging game. Your castle also started to make sense, instead of being an endless corridor it became a cluster of rooms.

What I really like about the game is that it plays fast, each turn plays very fast and player decisions go fast so there is little downtime. The role of the master builder also adds an interesting spin, and without it I think the game would be again too easy and bland. Building your castle, and trying to make all the rooms fit together, attempting to plan ahead in terms of layout while at the same time trying to keep up the scoring of points for placing rooms and unlocking bonuses is more fun than one would think at first.

The downside of the game is, as I described in my opening rant, the look/graphic design. The rooms are OK, but the boards for the cards and tiles look awful imo. It looks like a dungeon wall from Super Mario brother on the Nintendo 8-bit. With such a fun game it’s a shame that more energy was not put into making the game visually appealing.

It’s hard to give this game a proper score yet at the moment since we’ve only been playing 2 player games and I think the build master rule really comes into play in a more serious way when you play 3-4 player games. This is also likely a game that you would play with a mixed group, or new boardgamers since it is easy to get into and there is neither a heavy theme or a ton of components to give anyone a headache. I can’t really see myself picking this game for a dedicated game night with my boardgame group – on those rare occasions we get together we tend to want to play something more meaty and lengthy. But nevertheless I like the game, and Caroline enjoys it as well and shares many of my thoughts about the game quality and mechanics.