WizKids is excited to announce the release of their newest card-based adventure game, Endless Pass.

Designed by Nuria Casellas, two to six players take on the role of a Viking and explore the Pass while not only fighting the never-ending hoard of Endless, but rival Vikings as well. What are they fighting for? Eternal Glory!

The goal is simple: the last Viking standing or the first to earn 10 Glory, while surviving the turn, wins. If none of the players survive, then the player with the highest amount of Glory will take the honor of most worthy within Valhalla. To earn Glory, a Viking can either slay Endless as they appear in front of him or her or take it from another Viking in a surprise attack!

Each of the player boards are double sided. One side showing a generic Viking, all with the same stats, while the other is a named Viking Hero, such as Gunnar the Raider or Brynhild the Valkyrie, each with their own abilities. No matter what, each player has 10 health and needs 10 Glory. 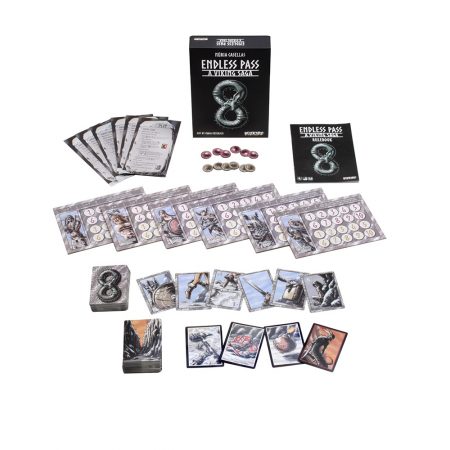