Following up on the success of the Removable Sticker Set for Gloomhaven, Sinister Fish Games is very happy to announce its next game: Villagers, by designer and illustrator Haakon Gaarder. Villagers launches on Kickstarter on May 15th.

A game of card drafting and village building for 1-5 players, Villagers is a light to medium-weight Euro style card game that feels like it should come in a much bigger box.

Players are charged with building a village from scratch, populating it from a limited and changing selection of 55 different villagers, many of whom rely on others for their tools and raw materials. New villagers are drafted from a central “road” area, which also acts as a timer for the game. With no single winning strategy, the game rewards careful drafting and the balancing of food production, building capacity, and earning potential.

Villagers includes an intriguing solo mode, in which the player faces off against an AI opponent; the dreaded Countess, who seeks to restore her former glory at any cost. The early rounds take place in Summer, but fair weather does little to lull the fury of the Countess. And when Winter comes, she really loses her temper. 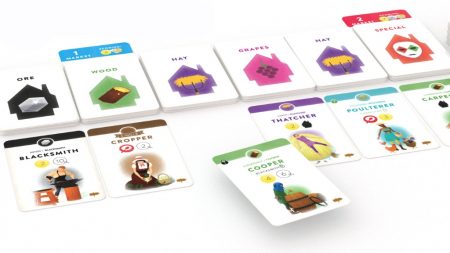 The Villagers Kickstarter campaign, launching Tuesday May 15th, will aim not only to raise the funds needed to manufacture the game, but also to expand it. Several modular mini-expansions are planned for the campaign stretch goals, including new villager cards and new ways to score. Any unlocked stretch goal content will be included for backers of the game at no extra cost, and will be available for purchase seperately after the campaign ends.

Additionally, Kickstarter backers will have the opportunity to pledge for a heavily discounted set of 107 wooden coins in a funky magnetic treasure chest, designed to replace the cardboard coins included in the game. The coins will come in six denominations all of different size, and will be available separately both during and after the campaign.