We may think we know the history of our world, but there are secrets that could undo our understanding of the universe. Hidden deep in the rainforests of southern Mexico, one such truth has the power to unravel the fabric of time itself. Now, your team of brave investigators must leave the safety of civilization behind and set out on a scientific expedition to make the discovery of a lifetime… but the perils you face may prove to be your undoing.

The third deluxe expansion for Arkham Horror: The Card Game, The Forgotten Age takes you deep into the jungle, where your expedition team searches for the ruins of a lost Aztec city-state. Hundreds of miles away from the outside world, you desperately search for the remains of a civilization that may not even exist. The danger grows with each step you take—beyond the treacherous creatures that reside here, like the powerful  Boa Constrictor (The Forgotten Age, 79), you feel almost as if the jungle itself does not want you here. You must explore (as featured in our announcement article), manage your supplies, and keep watch for the dangers lurking in every shadow in order to reach your destination.

Over the course of The Forgotten Age campaign, you will face harrowing dangers and encounter new treacheries unlike anything you’ve experienced in Arkham. This expansion contains two new basic weaknesses that only feature in campaign mode, and they’ll change their shape and grow in dark power as you progress throughout the campaign. 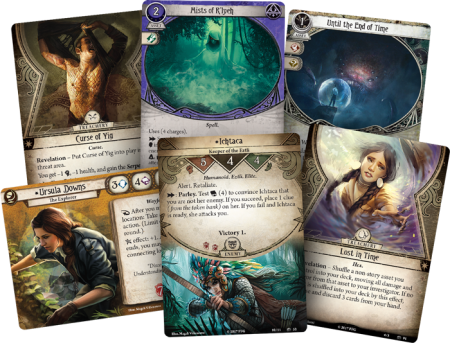