Someone Always Tells, the sixth Chapter Pack in the Flight of Crows cycle for A Game of Thrones: The Card Game is available now from Fantasy Flight Games!

Someone Always Tells draws the Flight of Crows cycle to a triumphant conclusion and brings its themes full circle. You can look for cards using the bestow mechanic as well as tools that encourage the Great Houses to work together through Banner agendas. Through all the new and dangerous cards that you gain, the intrigue, plots, and battles of A Game of Thrones: The Card Game are drawn to the new heights. In the Iron Isles, new leaders set a course for war, and in King’s Landing, a violent struggle for power emerges between the crown and the faith of the Seven.

As the Flight of Crows cycle comes to its climactic conclusion, the power of the Seven is stronger than ever. Meanwhile, the Great Houses of Westeros continue to scheme and plot in a world shattered in the aftermath of war. What alliances will you forge, and what price must be paid to see your schemes come to fruition? 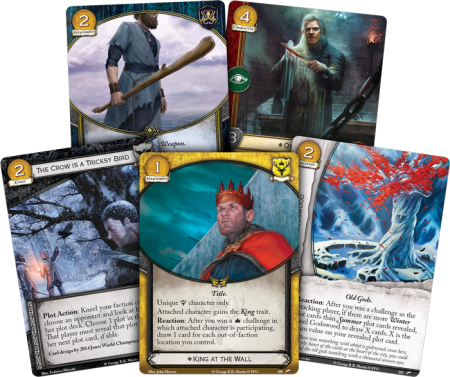