The Fires Within, the third Dynasty Pack in the Elemental Cycle for Legend of the Five Rings: The Card Game is available now from Fantasy Flight Games!

Within the cards ofThe Fires Within, you’ll find a variety of cards featuring the Fire trait and playing into the major themes of the cycle. Along the way, you’ll also find new Courtiers, Shugenja, Bushi, Spells, and more designed to enhance every Great Clan of Rokugan.

While the Elemental Cycle introduces powerful Shugenja and Spells in the Emerald Empire, these masters of magic are not the only samurai of Rokugan. Bushi and Courtiers stand at the ready to defend their clans, and though they may not be able to control the elements, they display their own considerable skills on the battlefield and in court.

While The Fires Within contains the power of flame, it is also home to non-Fire cards that are just as explosive. New Shugenja, Spells, Courtiers, Bushi, and more await, enhancing the Great Clans and providing them even more tools in the conflicts to come. As the elements continue to come undone, who will rise to the top of the Emerald Empire? 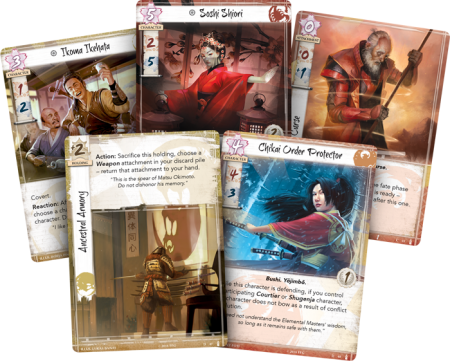