WizKids is excited to announce the release of its newest game of intrigue, Spy Tricks, designed by Susumu Kawasaki! In this trick taking game of intelligence and espionage, players are spies from different countries seeking to learn the information contained within the Secret Document – information that has the potential to influence the entire world!

In order to deduce what the Secret Document is, players will need to use their hands as well as observe the other players’ actions. There is even an element of gambling as they bet on the content of the Secret Document – each bet on the content locks out other players from guessing the same thing. At the end of 5 rounds of betting and guessing, the Secret Document is revealed.  Players receive points based on how accurate their guess was, and a new round begins. When all players have been the start player once each, the game ends, and players add their points together to determine the winner.

Think you have what it takes to be the world’s greatest spy? 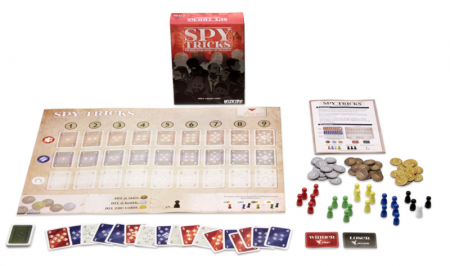