Fantasy Flight Games is proud to announce City of Secrets, the second Chapter Pack in the King’s Landing cycle for A Game of Thrones: The Card Game—now available for pre-order at your local retailer or online through Fantasy Flight Games!

In the King’s Landing cycle, you are no longer tied to a set time, but to a place—the capital of King’s Landing. You have approached the grand city and stood before the walls that surround the pit of snakes. Now, you are invited to move past the gates and begin your exploration of the treacherous and majestic city within. 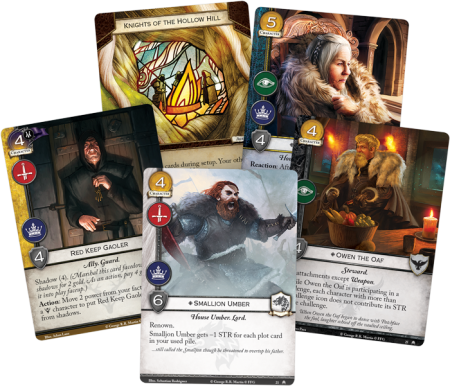 As A Game of Thrones: The Card Game continues to progress in the King’s Landing cycle, you have the chance to lay new schemes with the continued exploration of the shadows keyword. In every corner of the city, the twisting streets and hidden alleys conceal dangers. Your cards in shadows act as almost a second hand, one protected from intrigue claim and reserve restrictions. There’s no telling what traps you have hidden away until you are ready to spring them.

King’s Landing is not a place for the weak of spirit. Do you have what it takes to stand amongst the plotting courtiers of the capital, or will you meet your end in the capital as so many have before you? Assemble your allies, plan your schemes, and prepare to navigate the City of Secrets!