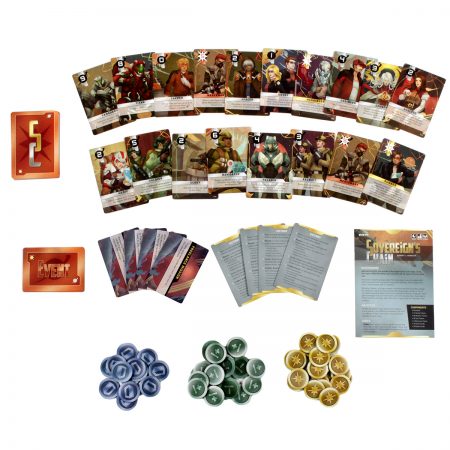 In this 2-4 player game, players will seek to achieve the highest score by placing Class cards in their chain—a row of cards in front of them with a variety of abilities and numbered values. Each card is one of two suits, designated by either a Star or a Planet symbol in the upper left-hand corner. Players must end the game with the greatest difference between the total values of each of the suits in their chain.

Each turn, players must play a Class card from their hand into either their chain or the chain of an opponent. Class cards must always be played faceup (unless otherwise indicated) and adjacent right to the last card in the target chain. After resolving the card’s ability, they draw a new card and end their turn. There is no minimum or maximum hand size.

If a Class card’s ability results in a card being removed from a player’s chain, all remaining cards immediately shift to the left, reforming the chain and filling in the gap. When a card is discarded, it is placed facedown. If the draw pile is empty, the discard pile is shuffled and becomes the new draw pile. Certain Class cards allow players to take a Shield or Modifier token. These tokens can either modify the score of a target card (adding or subtracting 1 point to/from its value) or prevent a card from being targeted by another card’s abilities. The game also includes Suit tokens, which can alter the suit of the card they are placed on.

The game immediately ends when any player’s chain reaches 7 Class cards at the end of their turn. Players will then reveal 1 facedown card in their chain, and activate its abilities. This process continues with each player revealing 1 card until all facedown cards have been revealed. Scoring then begins, and players will calculate the difference between the total points granted by each suit, respectively. The player with the greatest difference wins the game! Sovereign’s Chain is coming soon, so preorder it at your Friendly Local Game Store today!