Clandestinely acquire new lands, battle your rivals and compete for prestige in the era of Catherine the Great. Become a part of Imperial Russia’s Golden Age!
A new game from I Will Never Grow Up Games launches on Kickstarter on February 18th, 2020. 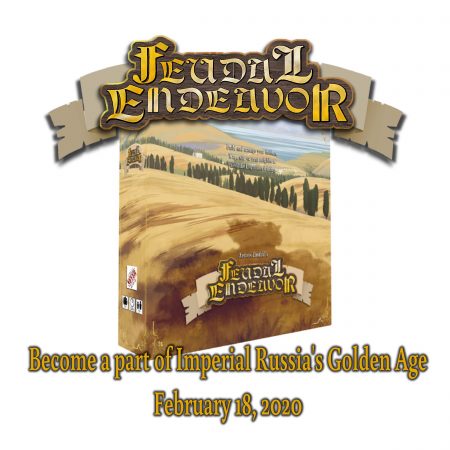 I Will Never Grow Up Games and designer Andrew Zimdahl are headed to Kickstarter to seek funding for their new board game, Feudal Endeavor, a simultaneous bidding auction game with resource management, tableau building and set collecting in the Golden Age of Imperial Russia.

Feudal Endeavor has been in development for 2 years and will finally launch on Kickstarter with the full art and design complete. The Kickstarter will feature the game at a base pledge level of CA$49 (approximately US$37). On funding in the first 72 hours everyone who pledges during the campaign will also receive Ulterior Motives, an expansion pack for Feudal Endeavor, free of cost (available at retail as an additional purchase)!

You are invited to step in to the role of the noble lords and ladies of Russia’s Golden Age. Clandestinely acquire new lands, battle your rivals and compete for prestige and the Empress’s favor.

Feudal Endeavor is a simultaneous bidding auction game with resource management, tableau building and set collecting for 2 to 6 players that plays in a quick 10 minutes per player set in the Golden Age of Imperial Russia. 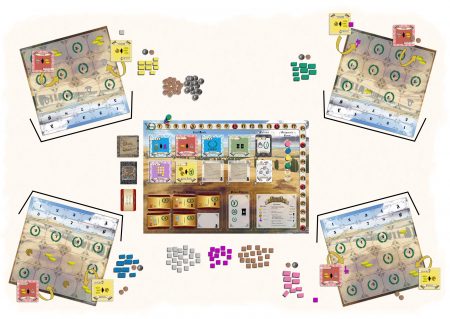 You will take on the role of the head of one of six prominent noble families in 18th century Imperial Russia under the rule of Empress Catherine the Great. Compete against your fellow nobles to earn prestige and the favor of the Empress as you expand your fiefdom, manage its rich resources and perform the Empress’s bidding.

Feudal Endeavor is played over 5 phases (bidding and resource management, family endowment, auction resolution, Empress’s bidding, restock), with players making most of their decisions simultaneously. The game ends immediately following the Empress’s Bidding phase in which any player has completed their fiefdom or the land deeds deck has been fully depleted. The player with the most prestige wins the favor of the Empress, Catherine the Great (and the game, of course)!

This site uses Akismet to reduce spam. Learn how your comment data is processed.