Paizo will begin weekly live streaming Pathfinder and Starfinder news and entertainment on Fridays at 4 PM Pacific on Twitch. Players can follow Paizo at https://www.twitch.tv/officialpaizo.

The inaugural episode on Friday, March 30 will feature Paizo’s Director of Game Design, Jason Bulmahn, who will answer questions about the Pathfinder Playtest. Fans can join in the discussion and hear the latest news coming from the design team.

In future live episodes, the channel will expand to include gameplay, interviews, seminars and interactive events.

The I Will Never Grow Up Games crew will be off until Monday, September 25th to run the 7th annual Field Marshal Gaming Convention!

If you’re in the area and looking for a fun, casual, family friendly weekend of tabletop gaming, check out FMGCon2017.

Located at the historic #420Wing Royal Canadian Air Force building in Oshawa, Ontario, Canada this event is host to no more than 100 tabletop gaming enthusiasts and newbies alike all coming together to play a ton of games all weekend long!

Come one, come all! We hope to see you there! 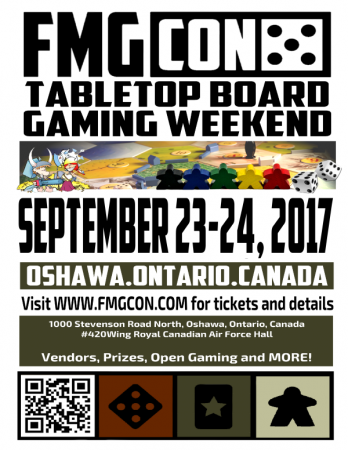 The staff and volunteers at I Will Never Grow Up Games would like to wish each and every one of you a Happy Holidays and a Shiney Happy New Year!

2016 was a great year in tabletop gaming and we’re looking forward to an even better 2017!

We’re off through to Wednesday the 28th when we’ll return to getting your game updates and shipping out products.

And, just a reminder, we have a boxing week sale in our web shop running from December 26th to 31st! 10-25% off a selection of products, while supplies last!

CMON Limited is proud to announce its Public Listing on the Hong Kong Stock Exchange’s (HKEX) Growth Enterprise Market (GEM) beginning December 2, 2016. This marks CMON’s next, exciting step in its meteoric growth inside the gaming industry. CMON will continue with business as usual in most regards.

Current employees, decision making, and management at the company remains unchanged. The controlling shareholders of CMON also remain the same and are steadfastly committed to the company. Chern Ann Ng, CEO of CMON Limited, explains, “We began laying the groundwork for this to happen in 2014, and this monumental achievement would not have been possible without the herculean efforts of the CMON family and outstanding support from the tabletop gaming community at large.”

CMON remains dedicated to giving fans the highest-quality gaming experiences through its retail and distribution partners, as well as Kickstarter. The increased capital from the Public Listing will allow CMON to grow an already amazing team, expand into new geographic markets, and acquire new titles, licenses, and properties that fit into CMON’s growing catalogue. The CMON that everyone knows and enjoys is still here but now with the ability to offer an even better gaming experience in our three core divisions: board games, digital games, and miniature games.

CMON is looking forward to the upcoming year with great titles like Rising Sun, The Godfather: The Board Game, mobile Zombicide and much more.

Oakland-based Indie Boards and Cards — which started in 2009 with a one hundred-copy release of owner Travis Worthington’s Triumvirate and has now sold more than one million copies of its titles — has announced a merger with Indianapolis-based Action Phase Games, which debuted in 2014 with Heroes Wanted from owners Travis R. Chance and Nick Little.

After the merger, the combined company will retain the Indie Boards and Cards name, with the Action Phase Games brand being used as an imprint for theHeroes Wanted line and, to quote the press release, “other select projects”. No changes will occur with retailer terms since both companies use PSI (Publisher Services International) for distribution beyond the reach of their multitude of Kickstarter-funded projects.

Excerpts from the press release announcing this deal:

“Having experienced tremendous growth over the past seven years, Indie Boards and Cards was at a critical point,” said Travis Worthington, CEO of Indie Boards and Cards. “I just couldn’t keep up with our existing business and continue to grow the company without bringing on a very talented group of game designers and developers. Travis R. Chance and Nick Little are excellent additions, with a proven track record of making great games and providing great convention coverage and customer support. Together we are going to be unstoppable!”

“I am very excited to be working within Indie Boards and Cards,” said Travis R. Chance, Director of Product Development & Marketing at Indie Boards and Cards. “We now have access to financial resources and market reach that we never had before and are looking to expand the number and quality of games we release each year. Ever since the news of merger discussions started to spread, we’ve been seeing a lot more game designs from both established and first-time game designers.”

“There are a lot of games and design concepts that have been sitting on the back burner at both Indie Boards and Cards and Action Phase Games that we’ll be able to work on now that I am able to focus on board game development full time,” said Nick Little, Director of Product Development & Manufacturing at Indie Boards and Cards. “I also look forward to working the convention circuit with Travis & Travis to find the gaming world’s next big blockbuster hit.”

Due to the merger, Indie Boards and Cards will now have a presence at the 2016 Origins Game Fair (since Action Phase Games already had a stand there) as well as at Gen Con and Spiel later in 2016.

Ares Games will attend Origins Game Fair 2016 (Booth #333, June 15-19, Columbus, Ohio) with four upcoming games to be presented to the public for the first time at this show – Warriors of Middle-earth, Last Friday, Behind the Throne and Dungeon Time – along with new products for sale, including the series six of WW2 Wings of Glory Airplane Packs and Adventures in Hyboria, the expansion for Age of Conan Strategy Board Game.

At Ares Games’ booth, visitors will also have the chance to try many other games already available, such as Odyssey – Wrath of Poseidon, Jolly Roger, Age of Conan Strategy Boardgame, WW1 and WW2 Wings of Glory, Sails of Glory, Galaxy Defenders, War of the Ring Second Edition, Battle of Five Armies and other Euro and Family and Card games, including the storytelling game Co-Mix, nominated for the Origins Awards, in the Family Game category. A prototype of Warriors of Middle-earth, the new expansion for War of the Ring Second Edition due to release in August, will be showcased, while the upcoming games Last Friday and Behind the Throne, coming in August, and Dungeon Time, to be launched on Kickstarter on June 29th, will have pre-production copies in demo at the show.

The new series of WW2 Wings of Glory Airplane Packs featuring the Messerschmitt Bf.109, Republic P-47, Yokosuka D4Y Suisei, and Douglas SBD Dauntless will be available for sale for the first time at the show – they will start to hit the stores on June, 17th; other new arrivals are the recently released Adventures in Hyboria and the Sails of Glory Cloth bags. Promotional items will be given with some purchases – the promotions will be announced at the show and on Ares Games Facebook page. I Will Never Grow Up Gaming will be heading to BreakoutCon on Saturday March 19th to demo Into the Black: A Game of Space Piracy and play some other games with everyone!

Give the preview copy of Into the Black a spin with the designer, provide feedback and have fun! Into the Black is set to launch on Kickstarter May 3rd!

BreakoutCon is being held at the Toronto-Yorkdale Holiday Inn.  A hall will be available for use all day and night for those who wish to game into the early hours. They are featuring several guest speakers, a hall for board games (including a library of over 100 games to borrow from) and a hall for roleplaying games.

With more than ten years of experience in running quarterly boardgame events, the organizers of the Toronto Area Boardgaming Society (TABS) have also paired up with the organizers of the Toronto Role Players Association (TRPA) and the Toronto Area Gamers (TAG) Meetup group to bring this event to life. With prizes, tournaments and special guests planned along with all the table-top gaming you can pack in over three solid days, there’s simply no better way to close out the March Break. 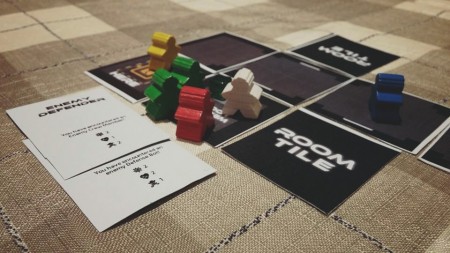 New Jersey-based game developer and publisher WizKids announced this week that Zev Shlasinger, formerly of Z-Man Games/F2Z Entertainment has joined the team and will head up its expanded Board Game operations.

“We’re excited to have Zev join the WizKids team. I’ve known Zev for years and always had my eye on him for a position with the company,” said Justin Ziran, president of WizKids. “Zev’s track record of success and his entrepreneurial spirit make him a natural fit with the team and we look forward to expanding our innovative board game offerings in new and unique ways.”

Zev founded Z-Man Games in 1999 and its first publication was the rebirth of the Shadowfist CCG. In 2001, Z-Man released its first non-collectible game, Grave Robbers from Outer Space, and the company set a new path from thereon. Delving into card games, innovative games (Warchon), RPGs, and then board games, Z-Man set a standard of quality and quirkiness. The eclectic publishing philosophy led to such releases as Pandemic, Agricola, Tales of the Arabian Nights, Saboteur, Endeavor, Merchants and Marauders, just to name a few among nearly 200 releases. In 12 years, Z-Man Games published original and licensed games to households all over the world and became a company held in high esteem in the board game industry.

In 2011, Zev sold the company to the owner of Filosofia Editions, and continued working on acquiring and developing games for Z-Man Games (which later became part of F2Z Entertainment). Some of the games discovered/developed during his time with F2Z include: Tragedy Looper, Chimera, Clash of Cultures, Terra Mystica, Dragon Farkle, to name a few.

“I plan to continue to bring original and unique ideas to market with the help of the WizKids team,” said Shlasinger. “They are very serious about building a board game business and are not afraid of good, fun, original ideas. In addition, WizKids has an amazing portfolio of licensed properties to enhance their board game presence in the industry. I think our combined qualities make a formidable team.”