The Medium Mark C Hornet was a British tank developed during the First World War, but produced too late to see any fighting.

In the (likely) eventuality that the Medium Mark D would not be ready for mass production in 1919, the Tank Corps hoped to receive no fewer than 6,000 Medium Cs that year, a third of which would be of the “Male” version, with a long six-pounder gun in the front of the superstructure. Though drawings were prepared, nothing would come of this. When the war ended all orders were cancelled, with only 36 vehicles nearly finished. These were completed, together with fourteen others built from pre-produced parts, for a total production of fifty. 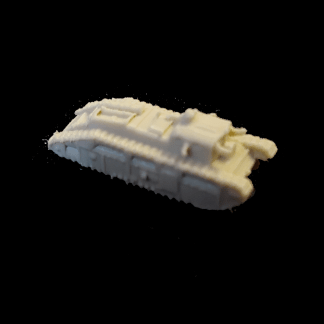