The Dunkerque class was a pair of fast battleships built for the French Navy in the 1930s; the two ships were Dunkerque and Strasbourg. They were the first French battleships built since the Bretagne class of pre-World War I vintage, and they were heavily influenced by the Washington Treaty system that limited naval construction in the 1920s and 1930s. French battleship studies initially focused on countering fast Italian heavy cruisers, leading to early designs for small, relatively lightly protected capital ships. But the advent of the powerful German Deutschland-class cruisers proved to be more threatening to French interests, prompting the need for larger and more heavily armed and armoured vessels. The final design, completed by 1932, produced a small battleship armed with eight 330 mm (13 in) guns that were concentrated in two quadruple gun turrets forward, with armour sufficient to defeat the Deutschlands‘ 283 mm (11.1 in) guns. Strasbourg was completed to a slightly modified design, receiving somewhat heavier armour in response to new Italian Littorio-class battleships. Smaller and less heavily armed and armoured than all other treaty battleships, the Dunkerques have sometimes been referred to as battlecruisers. 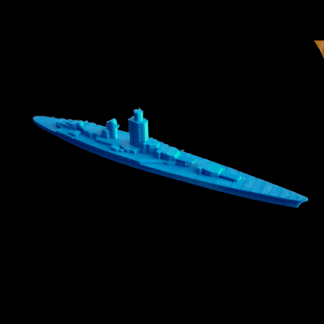 You're viewing: French Dunkerque Class Battleship $0.60
Rated 5.00 out of 5
Add to cart