The FCM F1 was a French super-heavy tank developed during the late Interbellum by the Forges et Chantiers de la Méditerranée (FCM) company. Twelve were ordered in 1940 to replace the Char 2C, but France was defeated before construction could begin, a wooden mock-up being all that was finished. The FCM F1 was large and elongated, and had two turrets: one in front and one in the back, with a single high-velocity gun in each turret. The rear turret was higher so it could shoot over the first one. The vehicle was intended to be heavily armored. Its size and protection level made it by 1940, at about 140 tons the heaviest tank ever to have actually been ordered for production. Despite two engines its speed would have been low. The primary purpose of the tank was to breach German fortification lines, not to fight enemy tanks. The development path of the FCM F1 was extremely complex, due to the existence of a number of parallel super-heavy tank projects with overlapping design goals, the specifications of which were regularly changed. For each project in turn several companies submitted one or more competing proposals. 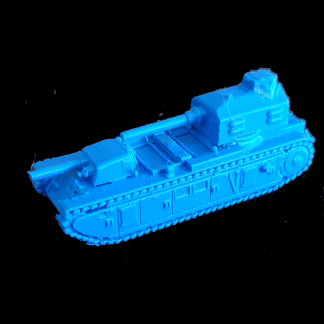