The Laffly W15 TCC Tank Hunter Tractor was deployed in WW2 by the French military as an anti-tank vehicle with motorized divisions. Derived from the W15T truck, this vehicle was characterized by the same general chassis 6×6 configuration, with a pair of rollers at the front and another in the middle, between the two axles. Both were not suspended and only there to provide additional ground pressure when crossing trenches or high obstacles. After an idea of general tank inspector Keller, rather of towing the 47 mm antitank gun, the latter was better carried directly on the cargo bay, turned to the rear.

TCC meant “Tracteur Chasseur de Chars”, tank hunter tractor. The original prototype was entirely armored and was virtually identical to the serie vehicles except for that the cabin and the 47mm SA mle 1937 gun were fully enclosed in an armored casemate. It was given a -13°/+13° elevation and 60° traverse to the rear. Production vehicles only retained the lower part of the armor and a new shield for the gun.  62 TCCs were delivered out of the 100 ordered.

The W15TCC were the first of its kind and proved very efficient in service with the Batteries Antichar Automotrices (BACA). Despite their numerous kills however they could do little to reverse the situation and by the end of June 1940, all had been lost in action or abandoned.

After the June 1940 armistice with Italy, four vehicles stationed in Tunisia were captured and reused by the Italian forces with the RECAM (Raggruppamento Esplorante del Corpo d’Armata di Manovra) until December 1941. These were re-armed by a 8 mm Breda 38 while a 13 mm was installed in the cargo bay for AA defense. The French vehicles were replaced after December 1942 by allied vehicles like the Marmon Herrington. 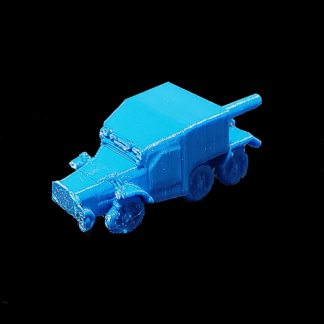