The Admiral Hipper class was a group of five heavy cruisers built by Nazi Germany’s Kriegsmarine beginning in the mid-1930s. The class comprised Admiral Hipper, the lead ship, Blücher, Prinz Eugen, Seydlitz, and Lützow. Only the first three ships of the class saw action with the German Navy during World War II.

Admiral Hipper and Blücher took part in Operation Weserübung, the invasion of Norway in April 1940. Blücher was sunk by Norwegian coastal defenses outside Oslo while Admiral Hipper led the attack on Trondheim. She then conducted sorties into the Atlantic to attack Allied merchant shipping. In 1942, she was deployed to northern Norway to attack shipping to the Soviet Union, culminating in the Battle of the Barents Sea in December 1942, where she was damaged by British cruisers. Prinz Eugen saw her first action during Operation Rheinübung with the battleship Bismarck. She eventually returned to Germany during the Channel Dash in 1942, after which she too went to Norway. After being torpedoed by a British submarine, she returned to Germany for repairs. Admiral Hipper while decommissioned after returning to Germany in early 1943, was partially repaired and recommissioned in the fall of 1944 for a refugee transport mission in 1945. Only Prinz Eugen continued to serve in full commission and stayed in the Baltic until the end of the war. 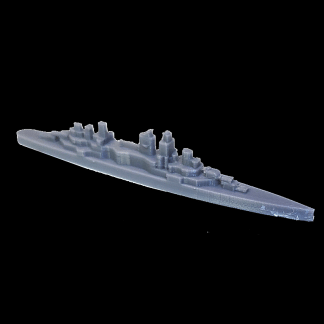