The German auxiliary cruiser Atlantis (HSK 2), known to the Kriegsmarine as Schiff 16 and to the Royal Navy as Raider-C, was a converted German Hilfskreuzer (auxiliary cruiser), or merchant or commerce raider of the Kriegsmarine, which, in World War II, travelled more than 161,000 km (100,000 mi) in 602 days, and sank or captured 22 ships with a combined tonnage of 144,384. Atlantis was commanded by Kapitän zur See Bernhard Rogge, who received the Oak Leaves to the Knight’s Cross of the Iron Cross. She was sunk on 22 November 1941 by the British cruiser HMS Devonshire.

Commerce raiders do not seek to engage warships, but rather attack enemy merchant shipping; the measures of success are tonnage destroyed (or captured) and time spent at large. Atlantis was second only to Pinguin in tonnage destroyed, and had the longest raiding career of any German commerce raider in either world war. She captured highly secret documents from Automedon.

Suitable for use as a Transport Ship replacement 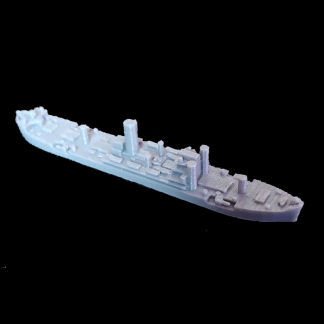