The Panzerkampfwagen E-100 (Gerät 383) (TG-01) was a German super-heavy tank design developed towards the end of World War II. An assault gun variant was also proposed. By the end of the war, a single prototype chassis of the E-100 had been produced, and it was only partially completed. After the war, the prototype was shipped to the United Kingdom for trials, but was later scrapped.

The basic design was ordered by the Waffenamt as a parallel development to the Porsche Maus in June 1943. It was the heaviest of the Entwicklung (E) series of vehicles, meant to standardize as many components as possible. The proposed designs were the E-10, E-25, E-50, E-75 and finally the E-100.

In March 1944, the Adler company in Frankfurt submitted blueprint 021A38300 for a super-heavy tank called E-100, after the tank was proposed in April 1943 along with the other Entwicklung series vehicles. According to the blueprints, the tank would be armed with a both a 150 mm gun and a 75 mm gun. Two types of engines were proposed: one was a 700 hp Maybach HL230, with a transmission and turning mechanism borrowed from the Tiger II. The estimated top speed was 23 km/h. The second variant would have a new 1200 hp Maybach engine and a top speed estimated at 40 km/h. The design had removable side skirts and narrow transport tracks to make rail transport more viable. This design was very similar to the original ‘Tiger-Maus’ proposal, but had larger 900 mm diameter road wheels and a new spring based suspension rather than the original torsion bars. A new turret was designed; intended to be simpler and lighter than the Maus turret. Permission was given to produce the tank based on the potential use of the E-100 as a tank destroyer with either a 15 cm StuK L/63 or 17 cm StuK L/53 gun.

In July 1944 Hitler ordered the development of super heavy tanks to stop. Work on the E-100 continued at a very low priority, with only three Adler employees available to assemble the prototype.

The first prototype was never fully completed and was found by the 751st Field Artillery Battalion of the American forces in April 1945. The partially completed vehicle was taken by the British Army for evaluation and then scrapped in the 1950s. 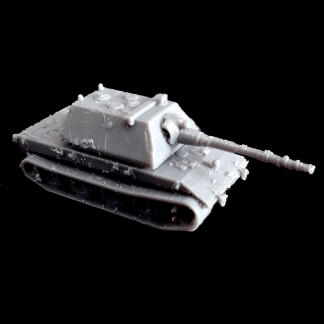