The Elefant (German for “elephant”) was a heavy Jagdpanzer (tank destroyer) used by German Wehrmacht Panzerjäger during World War II. Ninety-one units were built in 1943 under the name Ferdinand, after its designer Ferdinand Porsche, using tank hulls produced for the Tiger I tank design abandoned in favour of a Henschel design.

In January to April 1944, Ferdinands received modifications and upgrades. They were renamed Elefant in May 1944. The official German designation was Panzerjäger Tiger (P) and the ordnance inventory designation was Sd.Kfz. 184.

Ferdinands first saw combat in the Battle of Kursk, where eighty-nine were committed, the largest deployment of the vehicle during its service.

The units were deployed at a company level, sometimes sub-divided into platoons, with infantry or tanks in accompaniment to protect the flanks and rear of the vehicles. On the attack, this Jagdpanzer was a first-strike vehicle; while in defence, they often comprised a mobile reserve used to blunt enemy tank assaults. 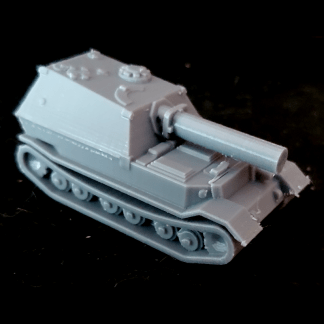