The Panzerkampfwagen III, commonly known as the Panzer III, was a medium tank developed in the 1930s by Germany, and was used extensively in World War II. It was intended to fight other armoured fighting vehicles and serve alongside and support the similar Panzer IV, which was originally designed for infantry support

On January 11, 1934, following specifications laid down by Heinz Guderian, the Army Weapons Department drew up plans for a medium tank with a maximum weight of 24,000 kg (53,000 lb) and a top speed of 35 km/h (22 mph). It was intended as the main tank of the German Panzer divisions, capable of engaging and destroying opposing tank forces, and was to be paired with the Panzer IV, which was to fulfill the second use: dealing with anti-tank guns and infantry strong points, such as machine-gun nests, firing high-explosive shells at such soft targets. Such supportive tanks designed to operate with friendly infantry against the enemy generally were heavier and carried more armour. 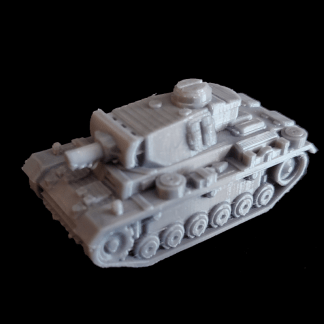