The Panzer IV was the most numerous German tank and the second-most numerous German armored fighting vehicle of the Second World War, with some 8,500 built. The Panzer IV chassis was used as the base for many other fighting vehicles, including the Sturmgeschütz IV assault gun, the Jagdpanzer IV tank destroyer, the Wirbelwind self-propelled anti-aircraft gun, and the Brummbär self-propelled gun.

The Panzer IV saw service in all combat theaters involving Germany and was the only German tank to remain in continuous production throughout the war. The Panzer IV was originally designed for infantry support while the similar Panzer III would fight armoured fighting vehicles. However as the Germans faced the formidable T-34, the Panzer IV had more development potential with a larger turret ring to mount more powerful guns and took over the anti-tank role. The Panzer IV received various upgrades and design modifications, intended to counter new threats, extending its service life. Generally, these involved increasing the Panzer IV’s armor protection or upgrading its weapons, although during the last months of the war, with Germany’s pressing need for rapid replacement of losses, design changes also included simplifications to speed up the manufacturing process.

In October 1940, the Ausf. E was introduced. This had 30 millimetres (1.18 in) of armor on the bow plate, while a 30-millimetre (1.18 in) appliqué steel plate was added to the glacis as an interim measure. A new driver’s visor, adopted from the Sturmgeschütz III was installed on the hull front plate. A new commander’s cupola, adopted from the Panzer III Ausf. G, was relocated forward on the turret eliminating the bulge underneath the cupola. Older model Panzer IV tanks were retrofitted with these features when returned to the manufacturer for servicing. 206 Ausf. Es were produced between October 1940 and April 1941. 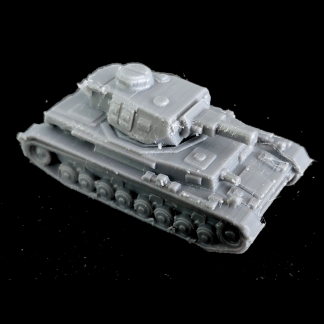