The Sturmgeschütz III (StuG III) assault gun was Germany’s most-produced fully tracked armoured fighting vehicle during World War II, and second-most produced German armored combat vehicle of any type after the Sd.Kfz. 251 half-track. It was built on the chassis of the proven Panzer III tank, replacing the turret with an armored, fixed superstructure mounting a more powerful gun. Initially intended as a mobile assault gun for direct-fire support for infantry, the StuG III was continually modified, and much like the later Jagdpanzer, was employed as a tank destroyer.

The Sturmgeschütz III-series of vehicles proved very successful and served on all fronts, from Russia to North Africa and Western Europe to Italy, as assault guns and tank destroyers. Because of their low silhouette, StuG IIIs were easy to camouflage and be hidden and were difficult targets to destroy. As of 10 April 1945, there were 1,053 StuG IIIs and 277 StuH 42s in German service. The StuG assault guns were cost-effective compared to the heavier German tanks such as the Tiger I and the Panther, although as anti-tank guns they were best used defensively as the lack of a traversable turret and its generally-thin armour was a severe disadvantage in the attack role. As the situation for the German military deteriorated further later in the war, more StuGs were built than tanks, particularly due to ease of production. 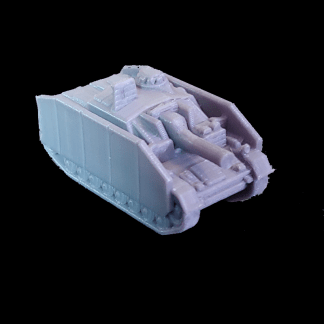