Customer matched zone "Locations not covered by your other zones"
View cart “3D Printed Shipyard” has been added to your cart.

The Carro Armato M15/42 was the last Italian medium tank produced during World War II. It was based on the earlier M13/40 and M14/41 medium tanks, and was built with the lessons from the North African Campaign in mind. The tank was meant to be a stopgap until the heavier P26/40 tank could be produced in numbers. It did not serve in North Africa, the theatre in which it was intended to operate, but served in Italy and in Yugoslavia with the German Wehrmacht.

In early 1941 the Italians attempted to create a tank, the M16/43 “Saharan Fast Medium Tank”, based on the design of a captured British A15 Crusader tank. Although the prototype tank performed well in trials, the type was cancelled in 1943; by this time, Italy had lost its North African territories and no longer needed a fast tank built for the deserts of North Africa. During the development of this tank, the Germans offered both their Panzer III and Panzer IV medium tanks for licensed production, under the condition that they supply half the resources needed for production, and all of the guns and sights for the tank. The Italians, not wanting to hand their industries to the Germans, rejected the offer, deciding instead to settle on an improved version of their own M14/41.

This tank would be 12 centimetres longer than the original M14/41, and would mount a new gun originally meant for the M16/43, a new gasoline engine (the 12 litre 190 hp SPA 15TB M42, chosen due to a shortage of diesel fuel in Italy at the time) and a new drive. The vehicle, officially known as the Carro Armato M15/42 (“M” for medium tank, the weight in tonnes (15), and the year of adoption (1942)), incorporated improvements learned from the battles in North Africa; but development of the tank’s main gun and ammunition meant that it could not enter production until 1 January 1943, when it was already obsolete.

The main armament consisted of an improved version of the 47 mm/L32 main gun, known as the 47 mm/L40. It was mounted in a fully rotating, electrically driven turret, and had an elevation of 20 degrees, and a depression of 10 degrees. The gun was capable of firing hollow charge, high explosive, and armour piercing rounds. The secondary armament consisted of five Breda 38 machine guns (two mounted in the hull, another two in a coaxial mount, and the fifth on top of the tank in an anti-aircraft mount.) 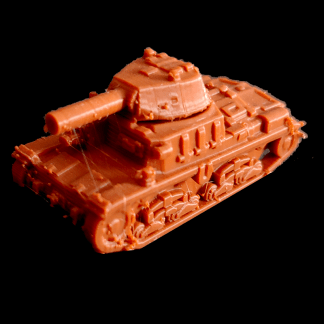