The Type 1 Gun tank Ho-Ni I was a tank destroyer and self-propelled artillery developed by the Imperial Japanese Army for use during World War II in the Pacific theater.

The Type 1 Ho-Ni I was developed by using the existing Type 97 chassis and engine, and replacing the gun turret with a 75 mm Type 90 Field Gun mounted in an open casemate with frontal and side armour only. The gun mounting gave ten degrees of traverse and -5 to +25 degrees of elevation; it could also traverse 20 degrees to either side, so the entire vehicle did not have to be turned. The Type 1 Ho-Ni I carried 54 rounds of ammunition.

They were designed to operate as self-propelled artillery at ranges of up to 12,000 metres (7.5 mi). The design had no provision for a defensive machine gun, which together with the open structure made it vulnerable in close combat.

The Type 1 Ho-Ni I was produced in small quantities in 1942, when it was superseded by the Type 1 Ho-Ni II and then the Type 3 Ho-Ni III. The total number produced of all three types in the Ho-Ni series were 111 units. Most of the Ho-Ni units were retained within the Japanese home islands to form part of the defenses against the projected American invasion, and did not see combat before the surrender of Japan. 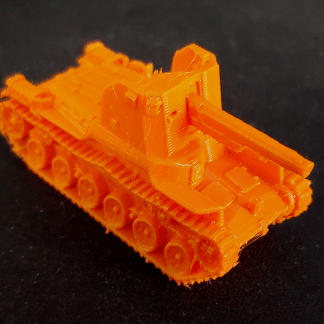