The Ise-class battleships (伊勢型戦艦, Ise-gata senkan) were a pair of dreadnought battleships built for the Imperial Japanese Navy (IJN) during World War I. Both ships carried supplies for the survivors of the Great Kantō earthquake in 1923. They were modernized in 1934–1937 with improvements to their armour and machinery and a rebuilt superstructure in the pagoda mast style. Afterwards they played a minor role in the Second Sino-Japanese War.

Despite the expensive reconstructions, both vessels were considered obsolete by the eve of the Pacific War, and neither saw significant action in the early years of the war. Following the loss of most of the IJN’s large aircraft carriers during the Battle of Midway in mid-1942, they were rebuilt with a flight deck replacing the rear pair of gun turrets to give them the ability to operate an air group of floatplanes. A lack of aircraft and qualified pilots, however, meant that they never actually operated their aircraft in combat. While awaiting their air group, the sister ships were occasionally used to ferry troops and material to Japanese bases. They participated in the Battle off Cape Engaño in late 1944, where they decoyed the American carrier fleet supporting the invasion of Leyte away from the landing beaches. Afterwards both ships were transferred to Southeast Asia; in early 1945 they participated in Operation Kita, where they transported petrol and other strategic materials to Japan. The sisters were then reduced to reserve until they were sunk during American airstrikes in July. After the war they were scrapped in 1946–1947. 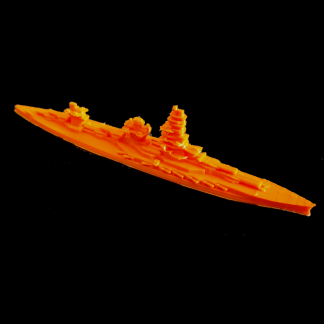