Kaga (加賀) was an aircraft carrier built for the Imperial Japanese Navy (IJN) and was named after the former Kaga Province in present-day Ishikawa Prefecture. Originally intended to be one of two Tosa-class battleships, Kaga was converted under the terms of the Washington Naval Treaty to an aircraft carrier as the replacement for the battlecruiser Amagi, which had been irreparably damaged during the 1923 Great Kantō earthquake. Kaga was rebuilt in 1933–1935, increasing her top speed, improving her exhaust systems, and adapting her flight decks to more modern, heavier aircraft.

The ship figured prominently in the development of the IJN’s carrier striking force doctrine, which grouped carriers together to give greater mass and concentration to their air power. A revolutionary strategic concept at the time, the employment of the doctrine was crucial in enabling Japan to attain its initial strategic goals during the first six months of the Pacific War.

Kaga‘s aircraft first supported Japanese troops in China during the Shanghai Incident of 1932 and participated in the Second Sino-Japanese War in the late 1930s. With other carriers, she took part in the Pearl Harbor raid in December 1941 and the invasion of Rabaul in the Southwest Pacific in January 1942. The following month her aircraft participated in a combined carrier airstrike on Darwin, Australia, helping secure the conquest of the Dutch East Indies by Japanese forces.

Following repairs, Kaga rejoined the 1st Air Fleet for the Battle of Midway in June 1942. After bombarding American forces on Midway Atoll, Kaga and three other IJN carriers were attacked by American aircraft from Midway and the carriers Enterprise, Hornet, and Yorktown. Dive bombers from Enterprise severely damaged Kaga; when it became obvious she could not be saved, she was scuttled by Japanese destroyers to prevent her from falling into enemy hands. The loss of Kaga and three other IJN carriers at Midway, was a crucial setback for Japan, and contributed significantly to Japan’s ultimate defeat. 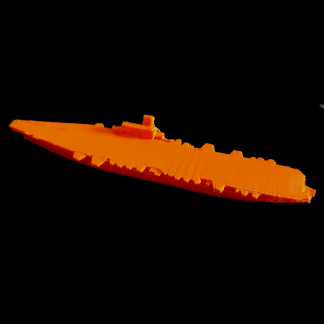