Shinano (信濃) was an aircraft carrier built by the Imperial Japanese Navy (IJN) during World War II, the largest such built up to that time. Laid down in May 1940 as the third of the Yamato-class battleships, Shinano‘s partially complete hull was ordered to be converted to an aircraft carrier following Japan’s disastrous loss of four of her original six fleet carriers at the Battle of Midway in mid-1942. The advanced state of her construction prevented her conversion into a fleet carrier, so the IJN decided to convert her into a carrier that supported other carriers.

Her conversion was still not finished in November 1944 when she was ordered to sail from the Yokosuka Naval Arsenal to Kure Naval Base to complete fitting out and transfer a load of 50 Yokosuka MXY7 Ohka rocket-propelled kamikaze flying bombs. She was sunk en route, 10 days after commissioning, on 29 November 1944, by four torpedoes from the U.S. Navy submarine Archerfish. Over a thousand sailors and civilians were rescued and 1,435 were lost, including her captain. She remains the largest warship ever sunk by a submarine. 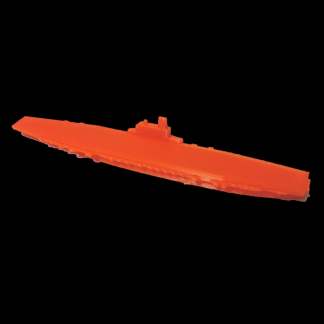