The Type 95 Ha-Gō  was a light tank used by the Empire of Japan during the Second Sino-Japanese War, at Nomonhan against the Soviet Union, and in the Second World War. It proved sufficient against infantry but, like the American M3 Stuart light tank, was not designed to combat other tanks. Approximately 2,300 were produced, making it the most numerous Japanese armoured fighting vehicle of the Second World War.

From early 1930s, the Japanese army began experimenting with a mechanized warfare unit combining infantry with tanks. However, the Type 89 Medium tank could not keep pace with the motorized infantry, which could move at 40 km/h (25 mph) by truck. For transport, tanks could be loaded on train platforms like in any other army of the times. To solve this problem, Tomio Hara of the Army Technical Bureau proposed a new light tank capable of 40 km/h speed and started development in 1933.

The prototype of the tank was begun in 1933 and completed in June 1934 at the Army’s Sagami Arsenal. Initial tests were positive, but it was too heavy at 7.5 tons and was reworked to bring the weight down to 6.5 tons. Due to doubts by the infantry as to its capability for infantry support it was tested in Manchuria in the winter of 1934/1935. The reports were favourable and a second prototype built, which was started in June and completed in November 1935.

In 1935, at a meeting in the Army Technical Bureau, the Type 95 was proposed as the main tank for mechanized infantry units. The infantry had concerns that the armor was insufficient; however, the cavalry indicated that the improved speed and armament compensated for thin armor. In the end, the infantry agreed, as the Type 95 was still superior to the available alternatives of the Type 92 cavalry tank and Type 94 tankette. 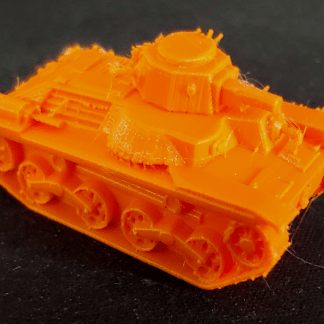