The Type 95 Heavy Tank was the final result of Japanese multi-turreted tank design, and was in commission during the time period between World War I and World War II. Modeled on German and Italian tank designs, this tank featured 3 turrets. The main armament being a 70 mm cannon in a central turret, with its secondary front turret mounting a 37 mm gun and a 6.5 mm machine gun in the rear turret. Four prototypes were produced in 1934.

The development of a new multi-turreted tank started in 1932 and was completed in 1934. The overall shape of the Type 95 followed the design of the earlier Type 91, but it had thicker armor and its firepower was significantly improved.[2] Its suspension system was modified from that of the Type 91. While still using a leaf spring suspension, it had only nine road wheels on each side. It was the largest Japanese tank at the time, weighting in at 26 tonne. Four prototypes were produced in 1934. However, the multi-turreted tank concept was cancelled, therefore, the Type 95 did not go into production. It proved to be a complicated design with poor mobility and had a lower top speed than desired.

Modeled on German and Italian tank designs, this tank featured 3 turrets. Mounted in the central turret was the primary weapon of Type 95, a Type 94 7 cm tank gun specifically designed for it. The cannon could fire both Type 92 high-explosive shells and Type 95 armor-piercing shells. The gun elevation angle was 20 degrees and gun depression angle was −12 degrees. A 6.5 mm machine gun was also mounted in the main turret. Two addition turrets gave Type 95 yet more firepower: a Type 94 3.7 cm tank cannon was mounted in one auxiliary turret, and the other rear facing auxiliary turret featured a 6.5 mm machine gun. 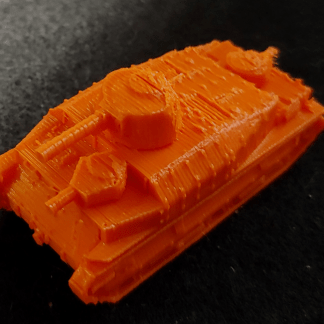