“For decades, reporters from around the world have been on the hunt for the Loch Ness monster. But lately reports of sightings of Nessie have been increasing.

“Such reports naturally have drawn such reporters as the attractive Belinda Viewing from New York, the half-Belgian Claude McMirror, the clever Filosa Sharp, as well as her Londoner competitor Jack Nesstee, and even Nils the Blitzen from Denmark to the Loch. Equipped with the most modern equipment and techniques, these daring reporters have traveled to Scotland, in order to capture the elusive Nessie on film for their newspapers.

In Loch Ness, players compete to get pictures of Nessie. In turn order, players place or move their photographers on the board as they try to anticipate the movement of the Loch Ness monster. The movement of the monster is determined randomly by drawing move cards from the first three players, each card having a number from 1 to 5. The cards are not revealed until after the photographers have been placed. When they are revealed, the monster moves the total number of spaces and players score points based on the value of their photographers placed in the area where Nessie emerged. In addition, the players whose photographers were directly in front of Nessie select photo cards that will award points at the end of the game, especially if sets are created.

Beginning in the second round, players will select an action space each round that gives them a unique power to use for for the round. Placement also gets more challenging from the second round onward as a player is required to move a photographer, perhaps opening up spots for opponents. Each round, some of the players do have a limited knowledge of how Nessie will move each round. When a player draws a movement card before positioning his photographers, he is allowed to look at it, giving him one-third of the movement for that round. However, movement varies tremendously and only three players draw movement cards each round.

The game ends after the round in which a mini Nessie figure reaches space 65 on the score track. This figure moves the same number of spaces as the main Nessie figure in the game board each round. The player with the most points, scored during the game and from the photo cards at the end, wins the game. The rules include two optional variants that can be added individually or together with the base game. 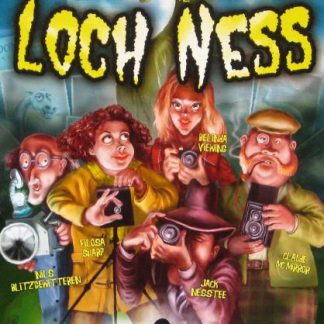