Mankind boasts many heroes, men of purpose and dedication without whom the Imperium would crumble. Yet even among their ranks there is a man whose nobility overshadows all others. His triumphs are without number and his deeds the stuff of legend. His name is Marneus Calgar.

It is on the field of battle that Marneus Calgar shows his immense skill. He is a proficient tactician and a master strategist, who can read the ebb and flow of battle as easily as another man reads words on a page. He leads the Ultramarines in battle if and when he is required, his mere presence inspiring his troops to great acts of valour and courage. It is here, in the eye of the storm, that Marneus Calgar’s titanic might is truly realised. He is a God of War and he will crush all before him. 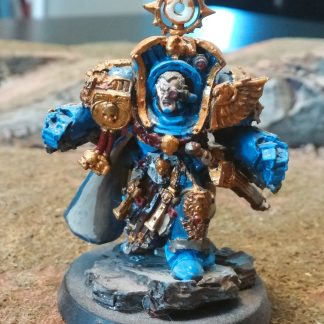 You're viewing: Marneus Calgar and Honor Guard $50.00
Add to cart