The original 2001 Axis and Allies Pacific game contained pieces they named “task force markers”, consisting of six numbered plastic roundel holders and six corresponding numbered printed cards. Their purpose was to allow a whole group of ships to be represented on the game map by a single marker (the roundel holder), convenient for situations where a lot of ships need to be crammed in to a tight space

I Will Never Grow Up’s Task Force Markers are a space saving accessory for Axis and Allies or other board games that have limited board space and large compliments of pieces taking up that space.

Use these Task Force Markers to consolidate your naval forces movement by setting the marker on the board and placing your naval miniatures pieces on the matching numbered card (off to the side of the board) and only having to move the one marker for your entire fleet! 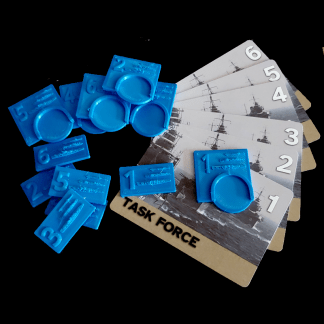