Welcome, brewmasters, to the world renowned Bavarian festival known as Oktoberfest! The 1810 wedding celebration of Crown Prince Ludwig I and Princess Therese of Saxe-Hildburghausen swiftly became an annual tradition known as Oktoberfest. Each year the scope of the festival expanded, and by the late 1800s sponsored beer halls and competing breweries were in full operation.

Oktoberfest is a card-driven game loosely based on the folk festival which began as a public celebration of a royal wedding. Based during the festival in the late 1800s, players vie for control of each of six types of beer, even though many of those beer styles are barely available in Bavaria and completely unrelated to Oktoberfest. As patrons arrive at the festival, players bid to decide where they go and how much they drink. By placing cards in the various tents, players can purchase barrels of beer based on the type and number of patrons on the card. The player who gets rid of the most barrels of each gains points for that type of beer at the end of the game.

The problem? The game ends before all twelve tents can be completed, and only closed tents count for points. Whichever beer type is the last in the tent before it closes claims all points for that tent, and the players with the most barrels of each type acquire points.

But watch out for the evacuation card that comes out randomly and wipes out entire tents. Collect the right types of barrels, close tents with the corresponding beer cards on top, and victory could be yours! 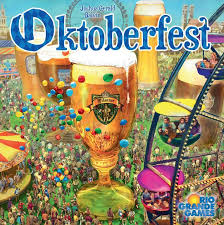