The BA-64 was a Soviet four-wheeled armoured scout car. The BA-64 was developed between July and November 1941 to replace the BA-20 then in service with armoured car units of the Red Army. Cheap and exceptionally reliable, it would later become the most common Soviet wheeled armoured fighting vehicle to enter service during World War II, with over 9,000 being manufactured before production ended.

The BA-64 represented an important watershed in Soviet armoured car technology, as its multi-faceted hull gave its crew superior protection from small arms fire and shell fragments than the BA-20. BA-64s also possessed a much higher power-to-weight ratio and the placement of their wheels at the extreme corners of the chassis resulted in exceptional manoeuvrability. Following the adoption of the BTR-40, the Soviet government retired its remaining fleet of BA-64s and exported them as military aid to various nations.

The first BA-64s produced were deployed in 1942. However, larger quantities were operated by Soviet units on the Voronezh Front and the Bryansk Front from mid to late 1943. BA-64s also took part in the final phases of the Battle of Stalingrad. During prolonged road marches, Soviet crews retrofitted them with standard tread road wheels to save fuel. BA-64Bs were deployed during Soviet offensives in Austria, Germany, Hungary, and Romania, seeing extensive combat during the Second Battle of Kiev and the Battle of Berlin. Eighty-one BA-64Bs were also donated by the Soviets to the Polish People’s Army and ten to the 1st Czechoslovak Army Corps. The Czechoslovak BA-64Bs were used in the Prague Offensive of 1945.

During the early to mid 1950s, ex-Soviet BA-64s were shipped to a number of Soviet client states in Eastern Europe and Asia. Small quantities were later also supplied to Yugoslavia. In North Korean service, the BA-64 engaged ground forces of the United Nations Command during the Korean War. The last country known to have received BA-64s for its armed forces was North Vietnam, although it is not known whether these saw actual combat during the Vietnam War.

By the 1970s, BA-64s had been retired by all Warsaw Pact armies, however, some remained in service with the national armies of North Korea and Albania. In 2013, the Korean People’s Army continued to hold an unknown number of BA-64s in reserve. 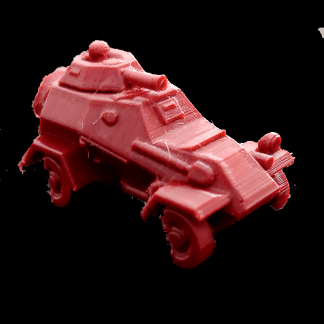