The BT-7 was the last of the BT series of Soviet cavalry tanks that were produced in large numbers between 1935 and 1940. It was lightly armoured, but reasonably well-armed for the time, and had much better mobility than other contemporary tank designs. The BT tanks were known by the nickname Betka from the acronym, or its diminutive, Betushka.

The BT-7’s successor was the famous T-34 medium tank, introduced in 1940, which replaced all of the Soviet fast tanks, infantry tanks, and medium tanks then in service.

In June 1941, at the outset of Barbarossa, the BT-7 was the main cavalry tank of the Soviet army. Tank losses were high, with over 2,000 BT-7 series tanks lost in the first 12 months on the Eastern Front. Hundreds more had been immobilized before the invasion by poor maintenance, and these had to be abandoned as the Soviet forces withdrew eastward. The BT-7 continued to be operated by the armored and mechanized forces of the Red Army for almost the entire war, but in greatly-decreased numbers after 1941. 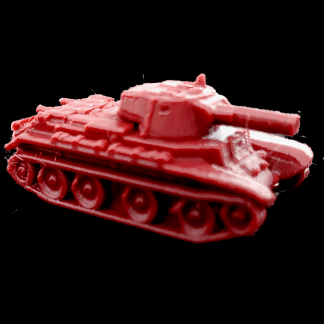