The KV-5 was a Russian super heavy tank project that was cancelled before a prototype was even created due to the Siege of Leningrad in which all operations of the Kirov Plant were halted.

Development began in June 1941 at the Leningrad Kirov Plant and was completed by August, but plans were interrupted due to the complicated situation on the front. The KV-5 was to utilize some components of the KV-1. A new turret was designed, incorporating the 107-mm ZIS-6 gun. Two roadwheels and a single support roller were to be added on each side. A new 1,200 h.p. diesel engine was being developed for the vehicle, however it was not completed in time and was replaced with two V-2K engines. 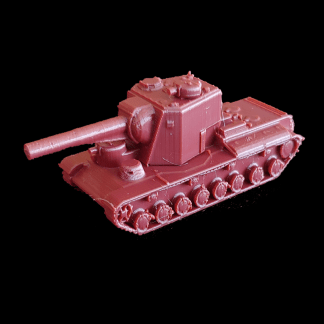