Despite the KV-1 heavy tank being able to withstand most German weaponry, poor technical characteristics was it’s Achilles heel during the Great Patriotic War. After the launch of ‘Operation Barbarossa’, the Germans were shocked to realize that the Red Army had tanks they couldn’t do anything about. The KV-1 was invincible and no match for most of the Wehrmacht’s weapons. When the Wehrmacht invaded Soviet territory, over 400 KV-1 tanks were deployed to face the enemy. Neither German tanks, nor anti-tank artillery, couldn’t destroy these “Russian monsters” or “Ghosts”, as the Germans called them. The only way was to allow a KV-1 come closer than 500 meters, which was akin to suicide.

The primary Soviet heavy tank throughout the first half of the war was the KV-1. More than 4,000 KV-1s were built before production ceased in 1943. At the time of its introduction in 1940, the KV-1 was one of the most powerful tanks in the world, though it was eclipsed by the superlative performance of the T-34. While the two vehicles shared similar armament, the KV-1 was less mobile, suffering from an incredibly poor transmission and greater weight of armor. 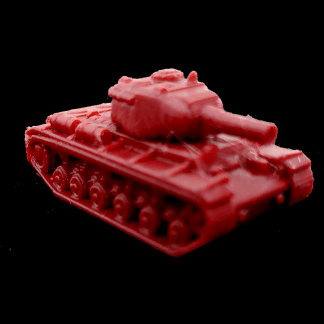