SUPERFIGHT is a game where you argue with your friends over ridiculous fights.

The game is very simple. It’s fun for all levels and kinds of players.

The main deck consists of 500 cards, split between character cards (white cards), and powers and weaknesses (black cards). These cards are used to create fights like this:

A KINDERGARTEN CLASS THAT BREATHES FIRE AND IS WEARING JETPACKS vs. A PIRATE SWINGING A SHARK ON A CHAIN AND RIDING A SEGWAY.

As you can imagine, the arguments over who would win the fight are epic and hilarious. 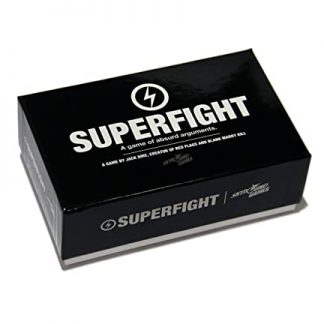 You're viewing: Superfight $7.95
Add to cart