HMS Eagle was an early aircraft carrier of the Royal Navy. Ordered by Chile during the South American dreadnought race as the Almirante Latorre-class battleship Almirante Cochrane, she was laid down before World War I. In early 1918 she was purchased by Britain for conversion to an aircraft carrier; this work was finished in 1924. Her completion was delayed by labour troubles and the possibility that she might be repurchased by Chile for reconversion into a battleship, as well as the need for comparative trials to determine the optimum layout for aircraft carriers. The ship was initially assigned to the Mediterranean Fleet and then later to the China Station, spending very little time in home waters other than for periodic refits.

Eagle spent the first nine months of World War II in the Indian Ocean searching for German commerce raiders. During the early part of the war, the Fleet Air Arm was desperately short of fighters and Eagle was equipped solely with Fairey Swordfish torpedo bombers until late 1940. She was transferred to the Mediterranean in May 1940, where she escorted convoys to Malta and Greece and attacked Italian shipping, naval units and bases in the Eastern Mediterranean. The ship also participated in the Battle of Calabria in July but her aircraft failed to score any hits when they attempted to torpedo Italian cruisers during the battle. Whenever Eagle was not at sea, her aircraft were disembarked and used ashore.

The ship was relieved by a more modern carrier in March 1941 and ordered to hunt for Axis shipping in the Indian Ocean and the South Atlantic. Her aircraft sank a German blockade runner and disabled a German oil tanker in mid-1941 but did not find any other Axis ships before the ship was ordered home for a refit in October. After completing an extensive refit in early 1942, the ship made trips delivering fighter aircraft to Malta to boost its air defences in the first half of 1942. Eagle was torpedoed and sunk by the German submarine U-73 on 11 August 1942 while escorting a convoy to Malta during Operation Pedestal. 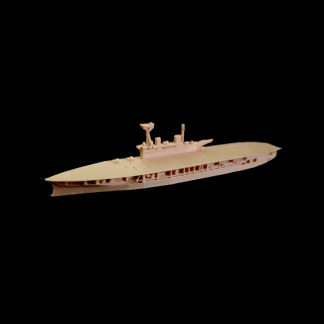