The Tank, Light, Mk VI was a British light tank, produced by Vickers-Armstrongs in the late 1930s, which saw service during the Second World War.

The Tank, Light, Mk VI was the sixth in the line of light tanks built by Vickers-Armstrongs for the British Army during the interwar period. The company had achieved a degree of standardization with their previous five models, and the Mark VI was identical in all but a few respects. Production of the Mk VI began in 1936 and ended in 1940 with 1,682 Mark VI tanks having been built.

When the Mk VI was first produced in 1936, the Imperial General Staff considered the tank to be superior to any light tank produced by other nations, and well suited to the dual roles of reconnaissance and colonial warfare. Like many of its predecessors, the Mark VI was used by the British Army to perform imperial policing duties in British India and other colonies in the British Empire, a role for which it and the other Vickers-Armstrongs light tanks were found to be well suited. When the British government began its rearmament process in 1937, the Mk VI was the only tank with which the War Office was ready to proceed with manufacturing; the development of a medium tank for the Army had hit severe problems after the cancellation of the proposed “Sixteen Tonner” medium tank in 1932 due to the costs involved, and cheaper models only existed as prototypes with a number of mechanical problems. As a result of this, when the Second World War began in September 1939, the vast majority of the tanks available to the British Army were Mk VIs; there were 1,002 Mk VI Light Tanks, 79 Mk I (A9) and Mk II (A10) Cruiser Tanks and 67 Matilda Mk I infantry tanks. Of these tanks, only 196 light tanks and 50 infantry tanks were in use by operational units of the army. 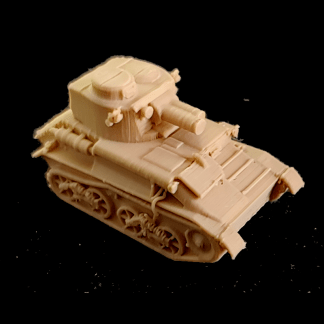