The Sherman Firefly was a tank used by the United Kingdom and some Commonwealth and Allied armoured formations in the Second World War. It was based on the US M4 Sherman, but fitted with the powerful 3-inch (76.2 mm) calibre British 17-pounder anti-tank gun as its main weapon. Originally conceived as a stopgap until future British tank designs came into service, the Sherman Firefly became the most common vehicle mounting the 17-pounder in the war.

During the war, the British Army made extensive use of Sherman tanks. Though they expected to have their own tank models developed soon, the previously rejected idea of mounting the 17-pounder in the existing Sherman was eventually accepted, despite initial government resistance. This proved fortunate, as both the Cruiser Mk VIII Challenger and Cruiser Mk VIII Cromwell tank designs experienced difficulties and delays.

After the difficult problem of getting such a large gun to fit in the Sherman’s turret was solved, the Firefly was put into production in early 1944, in time to equip Field Marshal Bernard Montgomery’s 21st Army Group for the Normandy landings. It soon became highly valued, as its gun could almost always penetrate the armour of the Panther and Tiger tanks it faced in Normandy, something no other British Army tank could reliably do at that time. 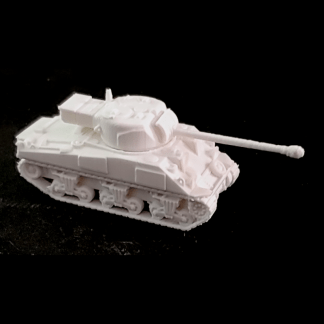