The 155 mm Gun Motor Carriage M12 was a U.S. self-propelled gun developed during the Second World War. It mounted a 155 mm gun derived from the French Canon de 155mm GPF field gun. The idea for the M12 was first proposed in 1941 and the pilot – T6 GMC – built and tested in early 1942. The Army Ground Forces initially rejected the design as unnecessary, but after the Artillery Board supported the Ordnance Department in asking for 50 units, 100 were authorized and built by March 1943. During 1943, the vehicles were used for training or put into storage. From February to May 1944, before the invasion of France, 74 M12s were overhauled in preparation for combat operations overseas. They were assigned to six armored field artillery battalions (the 258th, 557th, 558th, 987th, 989th, and 991st) and employed successfully throughout the campaign in North-West Europe. 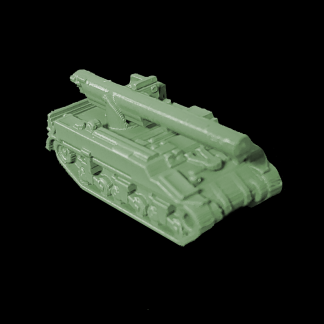